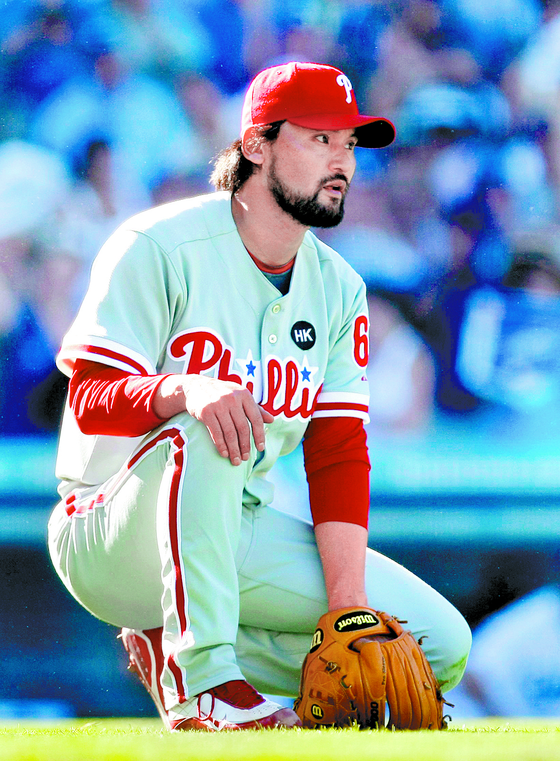 Park Chan-ho, at the time a Philadelphia Phillies relief pitcher, looks on after failing to field an eighth inning bunt from Los Angels Dodgers Ronnie Belliard in Game 2 of the NLCS playoff series in Los Angeles on Oct. 16, 2009. [REUTERS/YONHAP]

The four, speaking at a media event hosted by broadcaster KBS who they will commentate for during the Olympics, were optimistic about Team Korea's chances in Tokyo.

Park is Korean baseball royalty. He was the first Korean to play in the major league on April 8, 1994, and still holds the record for the most MLB wins by an Asian-born player, with 124.

Cho is a former midfielder on the Korean national football team. He made a name for himself during his national team debut, a friendly against Iran in 2005, where he scored a goal in just 59 seconds, a record in Korea to this day. He was still active last season, appearing as a player-coach with Suwon FC.

Ki is a three-time Olympic gold medalist in archery. She has also won five world championships and one Asiad gold medal at the 2010 Guangzhou Asian Games. She led the women’s national team to a gold medal and won an individual bronze at the 2016 Rio Olympics. 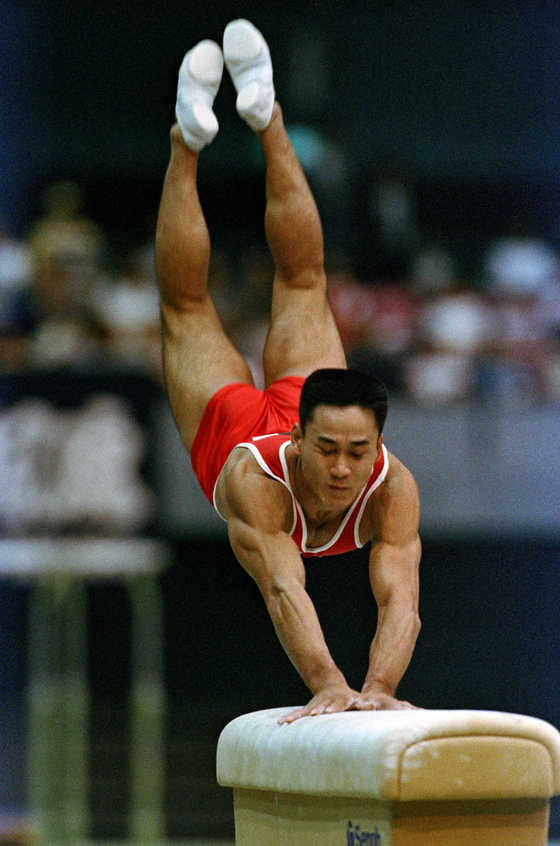 
Yeo, a retired gymnast, is a silver medalist from the 1996 Atlanta Games vault event. He won two consecutive Asiad titles in 1994 and 1998. A gymnastics pioneer, he has two original techniques named after him listed in the Code of Points. He is a three-time Olympian himself and his daughter Yeo Seo-jung looks to follow in her father’s footsteps as she prepares for the big stage.

Park was optimistic about the Korean baseball team's chances in Tokyo.

“Though I did not play at the 2008 Beijing Olympics, I take pride in Korea’s gold medal as a Korean baseball player” said Park when asked how he thinks the national baseball team will do on the big stage.

"And we get more competitive as a team when it comes to Japan. Head coach Kim Kyung-moon has picked out the most experienced and mentally strong athletes. It won’t be an easy match but I hope the match gives the Korean people the hope and energy that we need.”

Two members of the squad — Kim Hyun-soo and Kang Min-ho — headed to Tokyo also appeared at the 2008 Games. Park thinks this will help balance the young team.

“The national team now has new blood," Park said. "But I think that baseball fans will need to keep an eye out for veteran Kim Hyun-soo who was also at the 2008 Games.” 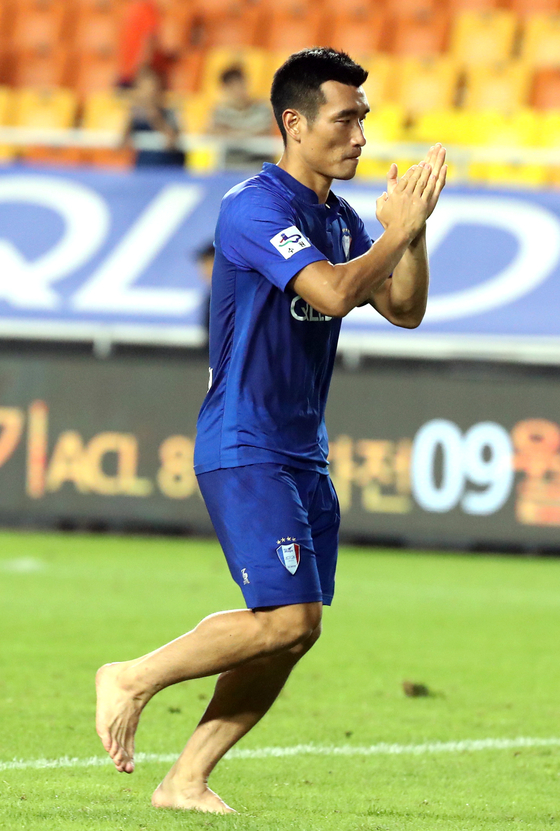 
Like Park, Cho has not had the privilege of playing on the big stage.

“I hope my former teammates do even better than at the London Olympics, when we won the bronze medal,” Cho said. “It will be interesting to see how head coach Kim Hak-bum will strategize with his three wildcard choices; Hwang Ui-jo, Kwon Chang-hoon and Kim Min-jae.”

Ki, as a three-time gold medalist, had some advice for the next generation of archers.

“Koreans are no doubt the best archers in the world” she said. “But don’t let that pride turn into arrogance. Just have faith in the sweat and toil that you have made, and results will follow.” 
For Yeo, the Tokyo Games is more special than ever as he will be commentating on his daughter’s first Olympics.

“I think Team Korea will get at least two or three medals in gymnastics in Tokyo” said Yeo. “With the Korean fans' support, I think they will do even better.”