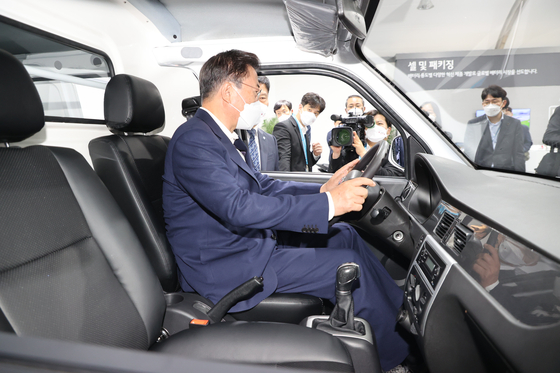 LG Chem and wholly-owned LG Energy Solution said Thursday they will invest a total of 15.1 trillion won ($13.1 billion) in Korea over the next 10 years to make the country a battery technology hub.

“The latest investment plan focuses on making Korea a production and R&D hub for batteries and accelerating internalization of battery materials,” LG Energy Solution said in a release Thursday.

LG Energy Solution will build the Institute of Battery Tech at its No. 2 Ochang factory in North Chungcheong to educate and build expertise in battery technologies. The institute will be housed in a six-story building with a Jan. 2023 completion date.

New equipment will be added to the No.2 factory for the manufacturing of prototypes.

The battery company will also build an additional building at its R&D center in Daejeon by 2023 to strengthen research in battery materials, such as cathodes and anodes.

Its smaller R&D centers in Magok and Gwacheon in greater Seoul will be tasked with researching next-generation batteries, such as solid-state batteries and lithium-sulfur batteries.

“LG Energy Solution will increase intellectual property based on the flexible operation of three R&D and production hubs and apply core technologies to our overseas production facilities,” Kim Jong-hyun, CEO of LG Energy Solution said, referring to the sites in Ochang, Daejeon and greater Seoul.

LG’s investment announcement was made during an event held at its Ochang plant on Thursday.

During Thursday’s event, the Korean government announced its plan to invest at least 40 trillion won by 2030 in further reinforcing Korea’s position in the global battery industry.

The Ministry of Trade, Industry and Energy on Thursday laid out the general blueprint for its so-called “K-battery” initiative, which includes R&D, tax and finance support.

More than half will be invested in battery facilities, including the upgrade of production lines, while 20.1 trillion won will be used for R&D.

“K-battery is a necessary industry that will open the future,” President Moon Jae-in said at the event. “It is an area in which we have led in the global market and should further strengthen our lead.”

Moon said now is a crucial time in which support from the government and the private sector needs to increase, especially as competition is intensifying.

Companies attending the event included other battery manufacturers, such as Samsung SDI and SK Innovation, and Hyundai Motor.

The government estimates that once Korea further expands its battery capacity through the massive investment and establishment of the battery ecosystem, it expects earnings from electric vehicle (EV) batteries to expand seven fold from 22.7 trillion won in 2020 to 166 trillion won by 2030.

This would give the country 40 percent of the global market.

Earnings of material, parts and equipment suppliers is expected to increase 14 fold from 4.3 trillion won to 60 trillion won, for a 20 percent global market share, during the same period, and the export of EV batteries is expected to more than double from $7.5 billion to $20 billion.

One of the key K-battery policies is developing and securing the steady supply of key materials, parts and equipment.

According to the government, Korea is heavily dependent on the import of EV battery components.

In boosting the material, parts and equipment production for batteries, an 80-billion-won fund will be created.

Tax benefits will be provided to private companies that invest.

A tax credit of up to 20 percent will be granted for facility investments, up from 12 percent, and up to 50 percent on R&D investment, up from the current 40 percent.

The government said it will also maximize the reuse and recycling of used batteries in securing the raw materials and components such as lithium and nickel, which would otherwise have to be imported.

“If semiconductors are like the head of our body, batteries, which are the source of energy, is the heart,” said Moon Sung-wook Minister of Trade, Industry and Energy.

The three battery manufacturers have 33.5 percent of the EV battery market this year as of May, according to market tracker SNE Research. By country, China is No. 1, with 44.7 percent of the market during the cited period, Ningde, China’s Contemporary Amperex Technology (CATL) is the largest manufacturer of the product.

The market is expected to grow further.

This is Moon’s second tech tour. In May, he visited the Samsung Electronics semiconductor plant in Pyeongtaek, which is the largest of its kind in the world.

The government announced at least 510 trillion won of investment by 2030 to turn Korea into the global semiconductor powerhouse.

Battery manufacturing is being pushed by the government as a priority industry.

There has been heightened interest over cooperation with the United States on batteries along with semiconductors and EVs, which were on the agenda when Moon and U.S. President Joe Biden met in May.

“We agree to cooperate to increase resilience in our supply chains, including in priority sectors such as semiconductors, eco-friendly EV batteries, strategic and critical materials and pharmaceuticals,” the joint statement by both presidents stated.

LG Energy Solution and SK Innovation will invest a total of $14 billion into battery manufacturing in the United States.