Coupon scheme could itself become a superspreader

Coupon scheme could itself become a superspreader 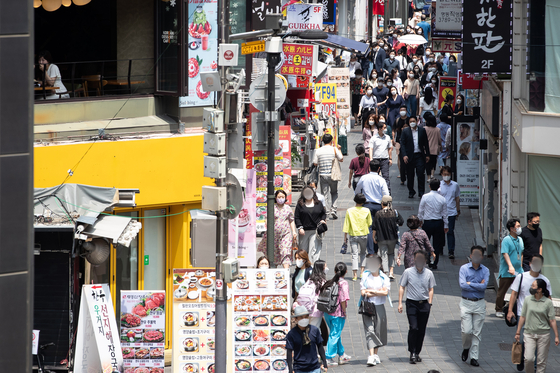 
A discount voucher scheme is running into trouble already as it could drive the spread of the virus. What was designed to help the economy recovery might just make the pandemic worse.

The Finance Ministry announced last month that it will issue 650-billion-won ($568 million) of discount coupons to support movie theaters, sporting events and domestic travel by rail and bus, starting August.

It was expected that the country’s vaccination rate would be at 50 percent by that time.

But with the recent resurgence in cases, some people are concerned about the possibility of the programs exacerbating the pandemic.

For the next month, the ministry is scheduled to distribute the coupons for restaurants, sporting events, movies, exhibitions and performances. It will move on to offer discount coupons related to travel in September when the vaccination rate is expected to rise to 70 percent.
A total of 11 million people will be entitled to coupons for agricultural products that offer up to 20 percent discounts. Movie theater discounts will be offered to 1.7 million and coupons for sporting events to 1 million.

As those options are mostly available offline, some worry that this could result in too much contact between individuals.

On top of the new coupons, the government will also resume the offering of coupons and vouchers that were planned last year but suspended in November following a spike in the number of infections.

Upcoming cash-back programs and relief funds, set for next month, are limited to brick and mortar stores in an attempt to revive locations hit hard by the pandemic. Convenience stores, restaurants and cafes were targeted.

Experts doubt whether these programs will really help.

“Even if the government keeps on churning out coupons and subsidies, those schemes will only substitute existing spending rather than increase the size of expenditure,” said Kim Sang-bong, an economics professor at Hansung University.

“I wonder how many people would spend over 1 million won on credit cards to get 100,000 won cash back,” Kim said, “The impact that the programs would have on boosting domestic consumption won’t be that dramatic, when considering the risks tied with them.”

The Moon Jae-in administration has been spearheading a set of policies aimed at increasing consumer spending to meet its economic growth target for this year at 4.2 percent, up from the initial target of 3.2 percent.