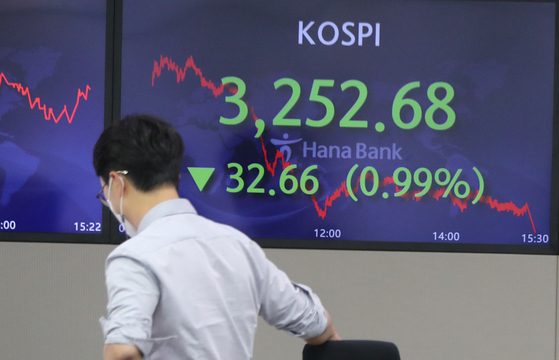 A screen in Hana Bank's trading room in central Seoul shows the Kospi closing at 3,252.68 points on Thursday, down 32.66 points, or 0.99 percent, from the previous trading day. [YONHAP]


Stocks plunged nearly 1 percent Thursday as investors turned risk-averse amid a surge in new coronavirus cases. The won fell against the dollar.

The Kospi got off to a strong start, taking a cue from the U.S. Federal Reserve's minutes that signaled that the world's largest economy would not advance its time frame for tapering its asset purchasing program.

The key stock index pared its gains in the morning session as Korea reported the highest number of daily Covid-19 cases since the virus first hit the country on Jan. 20, 2020.

Health authorities extended the current distancing curbs in the greater Seoul area for one week starting Wednesday, warning it may tighten the social distancing measures to Level 4, the highest level, if the case number continues to rise.

"Foreign investors sold off a bulk of local stocks amid the resurgence of Covid-19 cases, in addition to impacts from the expiration of options today," Bookook Securities analyst Lee Won said.

The local currency closed at 1,145 won against the dollar, up 6.9 won from the previous session's close.