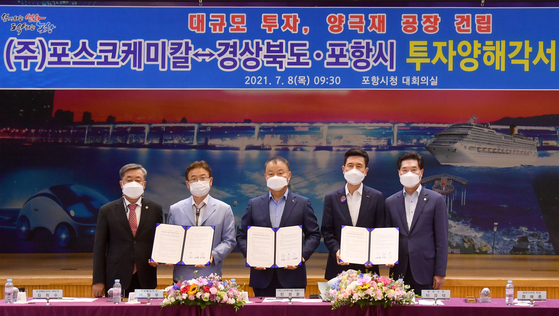 Posco Chemical will invest 600 billion won ($522.9 million) in a cathode plant in Pohang with an annual capacity of 60,000 tons, the company said Thursday.

Construction will start next year on the 120,000-square-meter plot near the city’s Yeongil Bay. Completion is aimed for 2025.

Cathodes are one of four core materials in lithium-ion batteries, which power electric vehicles. Made of lithium, nickel, cobalt and manganese, cathode materials account for 40 percent of the production cost of an EV battery.

Once the Ulsan factory is complete, Posco Chemical’s domestic capacity for cathode material will be 160,000 tons per year, which is enough to supply 1.8 million EVs with 60-kilowatt-hour batteries.

Posco Chemical plans to establish factories overseas as well. The company has not yet purchased land, but said it is considering locations in the United States, Europe and China — the world’s three largest EV markets.

The goal is to bring its global cathode capacity to 270,000 tons by 2025, when the company hopes to be a top tier supplier.

The Union Bank of Switzerland forecasts that EV sales will grow by an annual average of 28 percent from around 3 million units in 2020 to 35.5 million in 2030.

In 2018, the Posco Group identified EV material and parts as a future growth engine in a move to diversify its business from steel.

Since then, the company has been pushing investments in the field. Posco Material is at the core of that plan as a manufacturer of both cathode and anode materials. Parent company Posco has been acquiring assets to source raw materials like lithium, nickel and graphite as well as investing in research to develop new materials.

On Thursday, Posco Chemical and government officials of North Gyeongsang and Pohang got together to sign an investment agreement at Pohang City Hall.