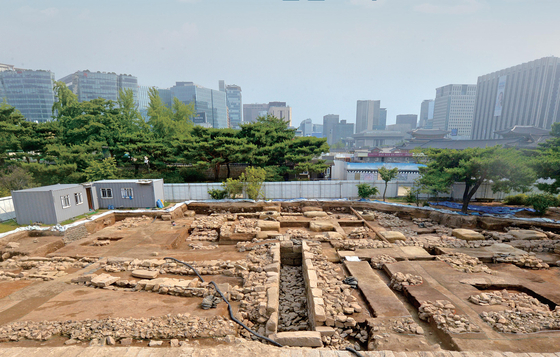 Architectural remnants of what is presumed to be an about 150-year-old lavatory with what researchers say were four or five cubicles have been discovered inside Gyeongbok Palace in central Seoul, the Cultural Heritage Administration announced on Thursday. According to historical documents recording the locations and dimensions of the lavatories in Gyeongbok Palace, like Gyeongbokgungbaechido (The Plan of the Gyeongbok Palace), the palace had about 75 toilets. But this marks the first time that a bathroom structure has been discovered inside the palace.

It measures 10.4 meters (34.1 feet) long and 1.4 meters wide with a depth of 1.8 meters. While researchers say users still had to squat by stepping on two rectangular slabs on either side of the toilet, the administration noted it has a similar structure to a modern-day septic tank, which turns human waste into minerals. The lavatory was built in 1868 and used for 20 years. It was found near Donggung, which was a palace for the Crown Prince.

The location indicates that it was used by people serving the Palace of the Crown Family. According to Lee Jang-hun, director of the Korean Institute of Odor Studies, there were only a few large-scale lavatories with such septic systems 150 years ago, adding that it’s a unique Korean style. The achievement result will be available on the administration’s YouTube from July 12.  [CULTURAL HERITAGE ADMINISTRATION]