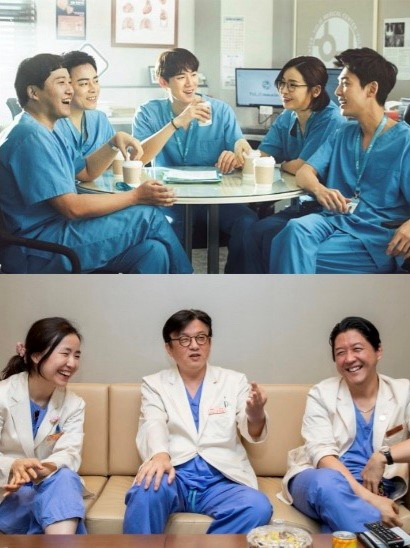 
The hit tvN series "Hospital Playlist" (2020-) centers around the story of five 40-year-old doctors who have been friends since medical school. The series may seem like a medical drama, but in fact, the characters simply happen to be doctors and the setting happens to be a hospital. In essence, the series tells the story of ordinary people, one of the reasons why it has proven so popular among viewers.

Because the main characters are so kind-hearted, some viewers say the series is an unrealistic "fairy tale for grown-ups." However, main characters Kim Jun-wan, Chae Song-hwa and Ahn Jeong-won are in fact based on real-life doctors: cardiothoracic surgeon Yang Ji-hyuk, ob-gyn surgeon Oh Soo-young and pediatric surgeon Lee Sang-hoon of the Samsung Medical Center in Gangnam District, southern Seoul. The three are also medical professors.

The JoongAng Ilbo, an affiliate of the Korea Joongang Daily, interviewed the three surgeons at the medical center last month. 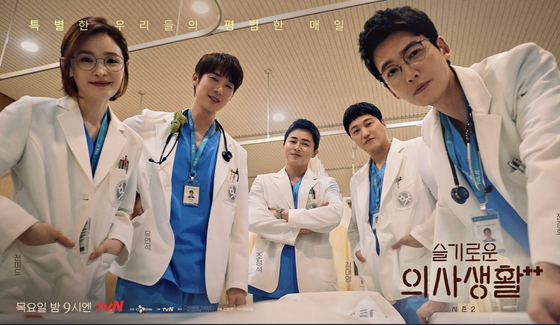 
Yang, Oh and Lee said they felt that the series "seems to make an effort to accurately show what goes on in a hospital."

"Sometimes [in the media] doctors are portrayed as some kind of absolute authority figures, but most of us are ordinary people just trying to get through the day, thinking 'if the patient is alright, I'm alright,'" said Yang.

"I was glad to see the everyday life and problems that doctors experience," said Lee, "as well as the pain and joy that patients and their loved ones feel. I think all those factors were thoroughly reflected in the series."

Lee said 10 out of the 40 classmates from his medical school are currently working at the same hospital as him.

"We talk about how similar we are [to the characters in the series]," he said.

The show's actors closely observed how the doctors receive patients or conduct surgery, which contributed to the accuracy of the show. Because the show features many scenes depicting surgery, Yang actually gave some of his practice medical tools to the actors via their managers to help their acting.

How similar are the show's protagonists and the three surgeons? 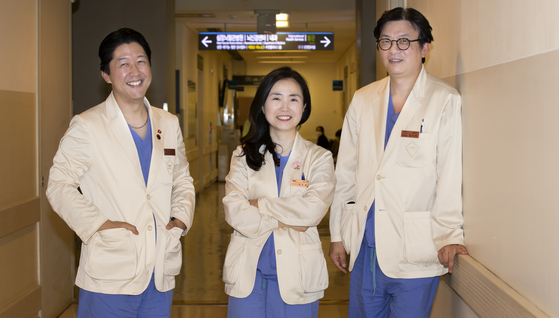 
"I think we're quite alike," said Lee. "People around me tell me that Doctor Ahn [his character equivalent in the show] talks just like how I talk to my patients. That's probably because the actor carefully observed how I interact with patients."

"Because our patients are young children, [pediatricians] are generally soft-spoken and friendly."

When a short interview clip with Lee was featured at the end of season one's final episode last year, netizens commented that Lee looks like an older version of Doctor Ahn.

Yang said that his character equivalent Doctor Kim is "just like a cardiothoracic surgeon, in the sense that he has a lot of affection for his patients, is a man of few words and is quick and firm when he makes decisions."

Oh, on the other hand, thought she and her character equivalent Doctor Chae have rather different personalities.

"Doctor Chae is a great professor who never gets angry, but I'm not like that," she said. "But physically we are similar in two aspects; we have the same shoe size and both have a herniated cervical disc. My neck was fine during the first season, but I recently developed a herniated disc."

"You increased the similarities then," laughed Yang. 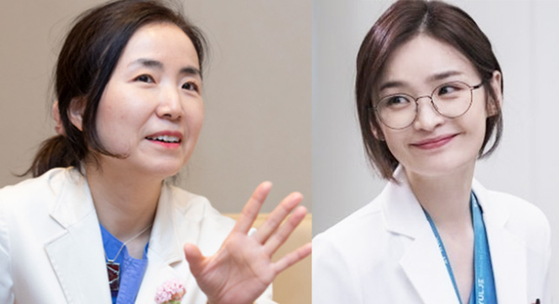 "We were always together for six years," Yang said. The two have remained best friends ever since.

Real-life anecdotes from the three surgeons' careers are incorporated in the show. Some examples are scenes in which the doctors comfort a mother as she watches her child in pain, or choose a Band-Aid featuring illustrations of a popular animated character for a young patient. Yang always has character Band-Aids on hand for his young patients. 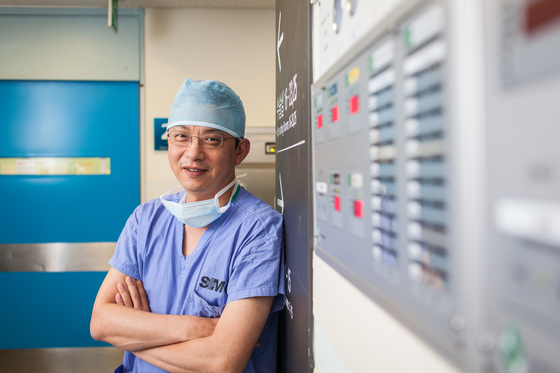 
Yang said some episodes made him look back on his own personal experiences. In a season two episode that recently aired, a mother gives birth to a premature baby named Yeon-woo who practically lives at the hospital for treatment but dies at the age of three. Yeon-woo's mother continues to visit the hospital even months after her child's death because the hospital is the only place where the staff call her "Yeon-woo's mother," which keeps the memory of her child alive.

Yang had a similar experience in the past; the mother of a child who passed away continued to call the intensive care unit every night. The episode featuring Yeon-woo's mother made Yang realize, "perhaps she kept calling because the medical staff were the only people who shared memories of her child. I didn't know that at the time."

"Some guardians visit much more often than they need to," said Lee. "I think it's because they're so used to taking care of their ill child 24/7 so they don't have many other people to talk to [apart from the doctors]. So I tell them to visit any time they want, and we chat for a while. My main job is to cure patients, but if I can help patients and their families in any other way, I try to do everything that I can." 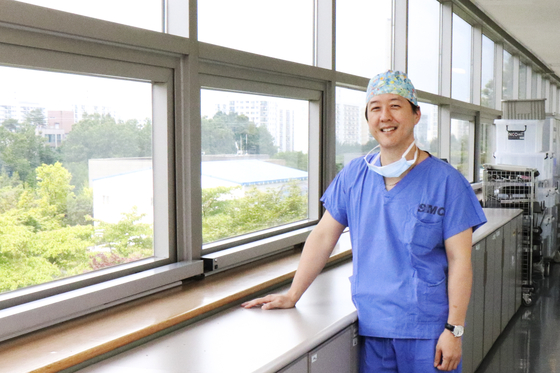 
The surgeons shared that elements of romance in the show are not completely fiction.

"There are some cases of [medical school] professors and students dating," said Yang. "They may face a lot of consequences when their relationship is exposed, so they're very cautious about it, but there are one or two cases at each hospital as far as I know."

"We [doctors] spend so much time together at the hospital, so we naturally become close with each other," said Lee. "Many doctors date or marry each other. I also married my junior colleague."

Oh also married a classmate from medical school, just like Doctor Chae in the show.

"People keep asking me how the characters' love stories are going to turn out, but I have no idea either," said Yang, laughing. "I only give consultations on the medical part of the script." 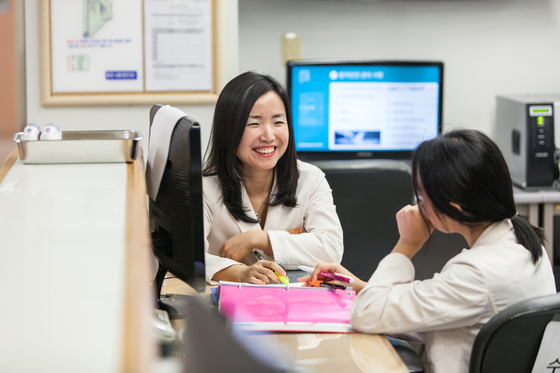 
Oh said that a hospital is like a "microcosm of life," involving human emotions such as sorrow, anger and happiness. She recently published "Thank You for Being Born" (translated), a book about the high-risk mothers she cared for and the babies she delivered.

The production staff of the series donated about 69 million won ($60,600) in the name of the three surgeons who consulted on the show. 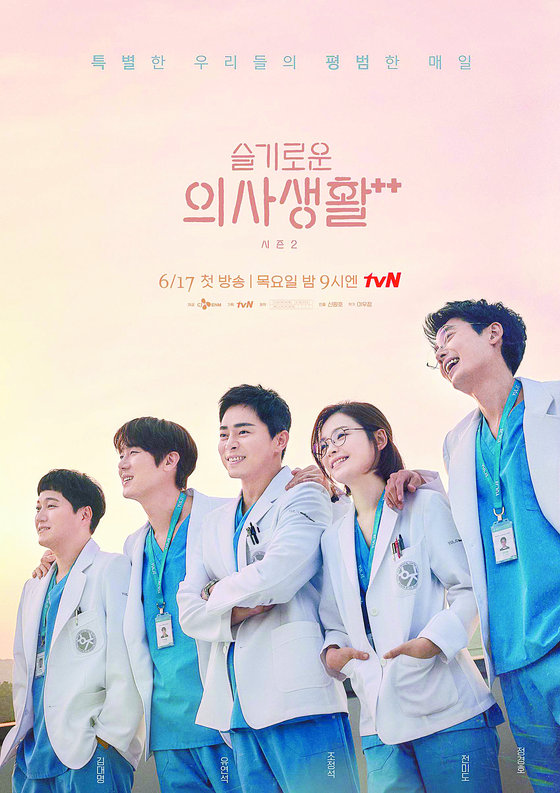 The poster for the second season of “Hospital Playlist” [TVN]


"When we're in medical school, we are told that the patient is the doctor's teacher," Yang said. "I agree with that whole-heartedly. The series tells the story of doctors, but that story begins from the patient. A doctor is simply someone who is part of the process of a person being born, growing old, falling ill and dying.

"I think the production staff also agreed with that sentiment and donated," said Yang, expressing his gratitude. The donated money will go to pediatric patients who are waiting for liver transplants.