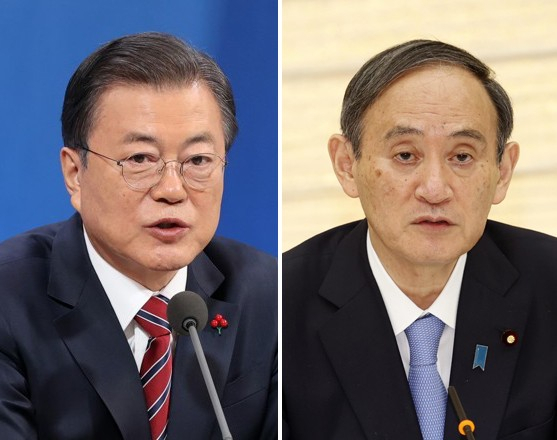 The Japanese media has reported on a possible summit between President Moon Jae-in, left, and Japanese Prime Minister Yoshihide Suga, on the sidelines of the Tokyo Olympics later this month. [JOONGANG PHOTO]


With two weeks left before the opening of the Tokyo Olympics, it's still possible Korean President Moon Jae-in will make a last-minute visit to Japan — and possibly turn around miserable relations between the neighbors.

While Moon hasn't abandoned the possibility of a visit to the opening ceremony of the Summer Games scheduled for July 23, Japan continues to float trial balloons in the local media.

Citing a Japanese government official, the newspaper reported that Korea is considering President Moon's participation in opening ceremony "on the condition of a successful Korea-Japan summit," which has been reported widely in Korea.

The report said that Japan will "accept the request of the Korean side."

Moon has yet to hold a bilateral summit with Suga, who was inaugurated as Japan's new prime minister last September. The two leaders had brief encounters last month at a Group of 7, or G7, summit in England, which ran from June 11 to 13.

At the G7 gathering, Moon met with leaders of Britain, Australia, France and the European Union, but talks with Suga did not come through despite attempts to set up a bilateral meeting, or a trilateral one with U.S. President Joe Biden.

Moon and Suga exchanged awkward short greetings at the G7. Japan has been rebuffing Korea's attempts to extend an olive branch to hold talks and cooperate despite ongoing disputes over history issues and Japanese export restrictions.

Suga told reporters after the meeting that Moon approached him first, and that he had said hello as "not to be rude," a move that Korean Second Vice Foreign Minister Choi Jong-moon called "tacky" in a radio interview last month.

The Mainichi report Thursday said that the Japanese government holds a "deeply-rooted mistrust" of the Moon government for not providing a concrete solution to the issue of the compensation of Korean forced laborers during World War II and the Japanese military's wartime sexual slavery issue.

It added that there is a possibility that a Moon-Suga summit could be canceled if discussions with Korea fall through.

The Japanese government has floated the idea of Moon's visit to Tokyo through local press multiple times in the past month.

On June 15, the Yomiuri Shimbun reported that Korea approached Japan with a proposal for Moon to attend the Olympics through diplomatic channels.

Moon's visit, the report said, could be a reciprocation of Japanese Prime Minister Shinzo Abe's attending of the opening ceremony of the PyeongChang Winter Olympics hosted by Korea in February 2018.

Similarly, the Sankei Shimbun reported Tuesday that Moon conveyed to the Japanese government his intentions to attend the Olympics, and that a bilateral summit will be held if such a visit is realized.

However, the Blue House has denied such reports.

Blue House officials this week clarified that Moon did not inform the Japanese side of his intention to visit Tokyo. They also indicated that should an agenda of issues to be discussed in a summit between the two countries is agreed upon, the president's visit may be considered.

Park Soo-hyun, the presidential senior secretary for public communications, was asked on an MBC radio program Wednesday if Japanese government officials are "playing around" about President Moon's visit, and replied, "I would believe the Korean people will think so."

But Park added he would like to see a bilateral summit happen, one where current issues could be addressed and "conflicts can be resolved," something he said that Japanese would also desire. He said that Moon continues to "hold an open position."

A Realmeter survey on June 25 found 60.2 percent of 500 adults over 18 surveyed nationwide opposed Moon's visit to Japan, while 33.2 percent were in favor.

Moon has not ruled out the possibility of a trip to Tokyo despite Japan's lukewarm stance and a lack of enthusiasm domestically. He wants to keep bilateral ties from deteriorating further, which can only be done from the leadership level.

Even if a Korea-Japan summit is arranged, Suga will be scheduled to meet with other foreign leaders on July 22, a day ahead of the Olympics opening ceremony, reported the Mainichi Shimbun. Thus, a meeting with Moon probably won't be able to delve too deeply into the broad range of bilateral issues between the countries.

A diplomatic source familiar with the issue said, "Some Blue House officials are of the opinion that even if a summit is held, it will be difficult to resolve the differences between the two countries right now."

The source added, "Nevertheless, President Moon has a strong desire to improve relations through dialogue and consultation with Prime Minister Suga."