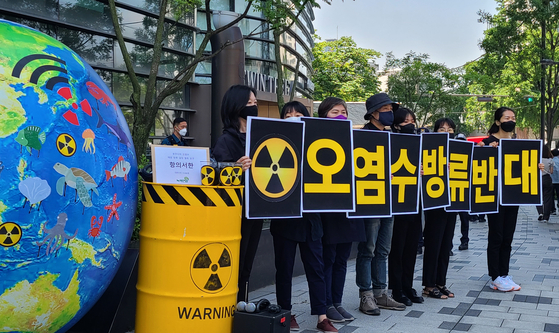 Members of a civic group protest Japan's decision to release radioactive water from the Fukushima nuclear plant in front of the Japanese Embassy in Korea in central Seoul on June 4. [YONHAP]

The International Atomic Energy Agency (IAEA) will be putting together an 11-member international committee including a Korean expert to monitor the release of contaminated water from the stricken Fukushima nuclear plant into the ocean.

The IAEA is expected to make an announcement about the committee’s formation soon, the JoongAng Ilbo reported on Thursday.

The Korean expert to take part in the committee, the JoongAng reported, is Kim Hong-suk, a researcher at the Korea Institute of Nuclear Safety. Kim was Korea’s representative to the United Nations Scientific Committee on the Effects of Atomic Radiation. He was included on a list of top 100 scientists in the world by Britain’s International Biographical Centre in 2009. 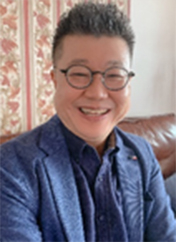 Kim Hong-suk, in a profile photo provided on the website of the United Nations Scientific Committee on the Effects of Atomic Radiation. [SCREEN CAPTURE]

Kim will be joined by members from 10 other nations, including the United States, China and France. The IAEA holds full authority in selecting members of the committee.

A massive earthquake and tsunami struck Japan on March 11, 2011, causing a meltdown at the Fukushima plant operated by Tokyo Electric Power Company. Some 1.25 million tons of contaminated water are stored in over 1,000 tanks there, enough to fill 500 Olympic-sized swimming pools, which are expected to be completely full in the latter half of next year.

The Japanese government announced on April 13 a controversial decision to gradually release wastewater stored at the plant into the sea in two years.

The Korean government, which since 2018 had put together a team to diplomatically solve the issue with Japan, protested loudly, with President Moon Jae-in ordering aides to look into legal action to stop Japan.

Although the plan has been protested by the Japanese fishing industry, international environmental groups and neighboring countries, the IAEA announced its intention to support Japan’s plan to discharge the contaminated water on the day of Japan’s announcement in April.

What did the government do?