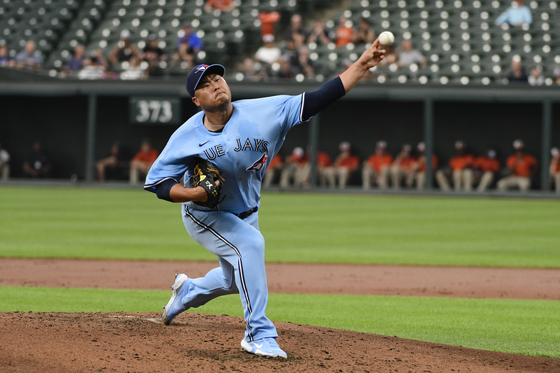 
After struggling on the mound for over a month, Ryu Hyun-jin is back. The Toronto Blue Jays ace threw seven strikeouts in five innings against the Baltimore Orioles on Wednesday, allowing one earned run in a dominant outing that snapped an uncharacteristic cold streak.

Ryu entered the game coming off a run of six starts — the whole of June and the first game of July — where he posted a 5.35 ERA. He still picked up two wins during that difficult run, but shaky control allowed opposing hitters to post a .815 OPS against him.

That all ended on Wednesday, when Ryu led the Blue Jays to a 10-2 win over the Orioles at Oriole Park at Camden Yards in Baltimore, Maryland, giving up just the one run — a sac fly in the fifth — in an otherwise strong outing. It wasn't perfect, but Ryu's control was back, his fastball was snappy and he nibbled the outside of the plate much more than in recent games. It was back to more of the same for a player who, until very recently, was one of the league's most consistent starters.

Ryu looked strong from the start, striking out three of four pitchers in the first, with the Orioles managing to get a double across early but unable to do anything with it. Meanwhile the Blue Jays bats were busy, scoring three at the top of the first with one run crossing the plate before the first out to ensure Ryu had a comfortable cushion going deeper into the game.

Ryu allowed a walk, one of only two in the game, and a single in the second, but a groundout, a forceout and a strikeout prevented the Baltimore team from making anything of them.

Almost the exact same formula followed in the third: A flyout and a groundout followed by a walk and then a strikeout to close the inning. Ryu settled down in the fourth, throwing two strikeouts and a groundout for a solid 11-pitch inning. The bats were back at it as well, adding three more runs to the Toronto total.

The Blue Jays added one more at the top of the fifth, before the Orioles finally had a chance to get on the board. Ryu's first pitch of the inning, an 88.8 mile-per-hour fastball over the plate was hit for a single, putting a runner on base before the fans had even found their seats. Two more singles followed, loading the bases with no outs.

With three on and no out, the Orioles didn't have to do much to bring home at least one run. It ended up being an Austin Hays sacrifice fly that got the job done, bringing home Domingo Leyba from third. That was all the Orioles could manage, with Ryu quickly forcing a double play to end the inning.

The Korean southpaw was replaced in the sixth. The Blue Jays scored two more that inning and one in the eighth, when the Orioles also added one run to take the score to 10-2.

Despite a tough month, Ryu still has an 8-5 line this season with a 3.56 ERA. He still has some work to do to get his control back to where it was and bring down that number — over the last three seasons Ryu has stayed comfortable below a 3.00 ERA.

Ryu and countryman Kim Kwang-hyun of the St. Louis Cardinals both struggled throughout June, with Kim at the tail end of a 10-game no-win streak that had begun at the very beginning of the season.

Both now seem to have bounced back — Kim has won his last two games, most recently throwing a dominant seven shutout innings in a 5-3 win over the San Francisco Giants on Monday.