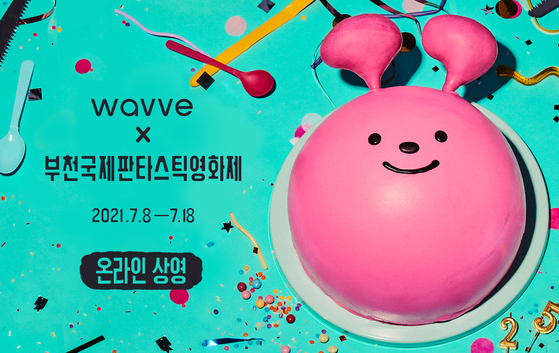 
For the second year, local streaming platform Wavve will screen films invited to the 25th Bucheon International Fantastic Film Festival (Bifan) from Friday due to the Covid-19 pandemic.

The online screenings will run until July 18 via Wavve's official website and its mobile application.

Wavve is set to screen 154 movies — 61 feature films and 93 short films —which accounts for 60 percent of the total number of films invited to the festival.

The event follows Wavve’s contribution to other film festivals that are experiencing difficulties because of the pandemic, including the Jeonju International Film Festival.

Four of the eight movies in the “Korean Fantastic: Competition” section can also be seen via Wavve. Among them is “Good Deal,” starring Korean actor Jeon Seok-ho, who is known for his role in the television series “Misaeng: Incomplete Life” (2014) and the Netflix series “Kingdom” (2019).

Six feature films and 12 short films have been selected for the “Bucheon Choice” section including “The Feast” (2021) by Welsh director Lee Haven Jones, known for producing some of the episodes for BBC television series “Doctor Who” in 2020 and “King Car” (2021) by Brazilian director Renata Pinheiro.