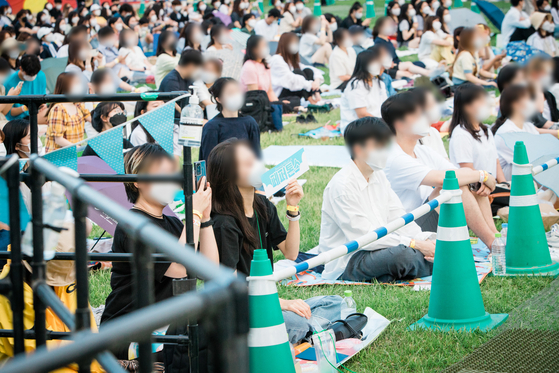 
Concertgoers are in for another disappointing summer, as the government's stricter social distancing guidelines have once again led to pop music concerts being either postponed or moved online.

Earlier this month, concerts with up to 5,000 people were allowed to take place under relaxed social distancing measures. The Beautiful Mint Life Festival took place at Olympic Park in southern Seoul on June 26 and 27 and the "Sing Again Top 10" concert was held from July 2 to 4, heightening concert fans' anticipation for more to come.

The first to be canceled was the "Sing Again Top 10" concert that was supposed to take place Saturday at an indoor gymnasium in Suwon, Gyeonggi. 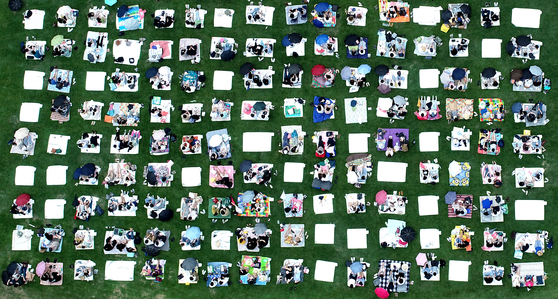 Picnic mats are distanced from each other at the Beautiful Mint Life 2021 music festival held last month. [YONHAP]


Its organizer Showplay announced on ticket seller Interpark's website that the government ordered that the number of people in attendance be kept below 100, leading them to decide to cancel the show altogether. All tickets will be refunded without any cancelation fees, Showplay said.

The "Sing Again" concert scheduled to take place in Goyang, Gyeonggi, on July 24, has also been canceled.

The "Miss Trot Top 6" concert, which was scheduled to take place from July 16 to 18 at the Olympic Park, was indefinitely postponed. But the Cheongju concert in North Chungcheong will take place as initially scheduled from July 10 to 11, as Cheongju's distancing levels have remained the same.

The much-anticipated large-scale K-pop concert titled “Together Again, K-pop Concert” will be held on July 17 online, instead of the SK Olympic Handball Gymnasium at Seoul Olympic Park.