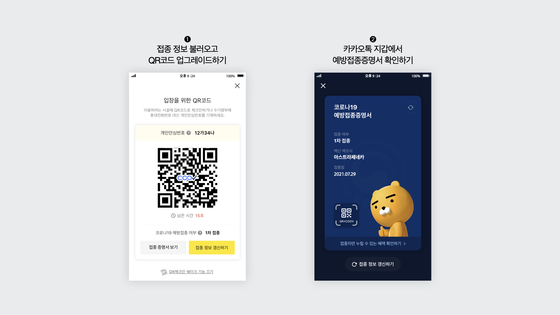 A screen capture shows a user's vaccination status displayed on the KakaoTalk application (left) and specific details such as vaccine type and vaccination date shown in the application's digital wallet tab (right). [KAKAO]


Phone companies and Korean internet giants teamed up with the Korea Disease Control and Prevention Agency (KDCA) on a vaccination status system, the closest thing yet to a vaccine passport.

The service will be available on KakaoTalk, Naver, Toss and authentication application Pass.

Up until know, to prove your vaccination status, you had to use the KDCA’s COOV app or produce a paper certificate issued by the health clinic. Vaccine certificates need to take advantage of inoculation benefits such as discounts at movie theaters.

The KDCA said on June 22 that it was working on a simpler vaccination authentication system that piggybacks on the system now used to generate QR codes for registering entrance in public places like bars and restaurants.

Pass, an application developed by fintech company Aton and run by KT, SKT and U+, will have a QR X COOV tab starting July 12. After a user registers a vaccine certification, the Pass app will show whether he or she has received the first or second dose of a Covid-19 vaccine.

For fully-inoculated people, the app will show if two weeks have passed since the last jab, acquiring full immunity.

Naver's application will have the same features.

On KakaoTalk, only information about first and second doses is displayed with the QR Code.

Specific information such as vaccine type and vaccination dates will be accessed on a separate tab In the application’s digital wallet section. Kakao launched its digital wallet in January, allowing users to carry digital versions of government certificates.

Kakao announced that it plans to continue to collaborate with other government agencies to offer Covid-19 related services for its users. In May, the tech company allowed people to reserve leftover vaccines on KakaoTalk.

Safe restaurant guide to be offered by Kakao