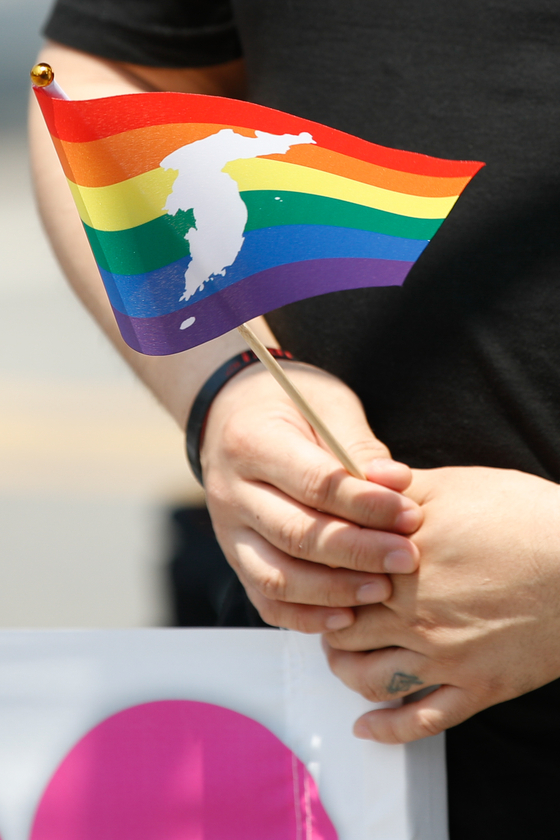 A participant holds a rainbow flag at the 2021 International Day Against Homophobia, Biphobia, Interphobia & Transphobia in Sinchon, western Seoul, on May 22. The event was held under the slogan ″We are here″ and urged the National Assembly to pass an anti-discrimination law this year. [NEWS1]


An anti-discrimination law has been knocking on the doors of Korea's National Assembly for more than a decade with no success, but it seems as though escalated public demand — and also opposition — for the act has built up enough momentum to finally see some real action in parliament.

On May 24, a petition was put forward to the National Assembly urging an anti-discrimination act be established in Korea’s legal system. The petition was started by a 25-year-old woman surnamed Kim, who identified herself as the victim of Donga Pharmaceutical’s sexist job interview incident that made headlines earlier this year. In March, Kim revealed that she took part in a job interview for Donga Pharmaceuticals along with two male interviewees, during which she was questioned by two male executives who asked her whether she “agreed with men getting paid more” because women didn’t serve the two-year military services men are obligated to and whether she “was willing to serve later” as a soldier.

Having first denied the interview was unfair, Donga Pharmaceutical’s President Choi Ho-jin later issued an apology after the Ministry of Gender Equality and Family and the Ministry of Employment and Labor promised to take measures in order to prevent similar cases in the future.

The petition soon went viral and accumulated 100,000 signatures within four days, meeting the criteria for it to be passed along to the Legislation and Judiciary Committee, where it will be screened by parliament members who will decide if it will be put on the agenda at the National Assembly’s plenary meeting. Unlike the online petition board on the Blue House website, which can be signed with just an ID on Korean portal sites such as Naver or Kakao, the petition on the National Assembly can only be signed by individuals who submit their names and a form of identification.

“I have lived my 25 years of life as a person with vested rights,” wrote Kim in her petition. “I was born to a wealthy family, raised in Seoul and abroad, graduated from a four-year university in Seoul, I am heterosexual and have no disabilities and I am a full-time employed worker. But six months ago, I experienced all those powers crumble down in the face of my sex. That’s when I realized that all powers are relative and that I could always become the minority, the subject of exclusion and hate. And I wasn’t alone in this experience.”

A coalition of professors and experts against the establishment of an anti-discrimination law holds a press conference on Aug. 20, 2020, at the National Assembly, explaining why the such law will ″tear families apart and oppress people's freedom.″ [YONHAP]


“I often see people suffer because their children are homosexual,” the petitioner said. “I even heard of a mother who fainted because her son was living in Seoul with a man. Don’t think that this is someone else’s story. The world falls apart when your children become homosexual or transgender [...] The West made the equality law mistaking it as a good law. It would be foolish of Korea to follow in their footsteps knowing these problems. I hope that Korean households don’t have to go through such pain.”

The petitioner attached a document titled “Reasons for Opposing the Equality Law,” which cited 12 reasons for going against the act, such as: Women will be discriminated at sports events because male-to-female transgender athletes will compete with female contestants and beat them with biological advantages; Gender-free toilets and dressing rooms will lead to women falling victim to sex crimes; And homosexual and transgender codes will “eat away” cultural content such as children’s animations, pop music and films.

However, contradicting results were shown by a survey conducted by the National Human Rights Commission, which interviewed 1,000 people across the country via research company Realmeter in June last year. According to the survey, 88.5 percent said they were for the establishment of an anti-discrimination law. Of the 11.5 percent that said they were against the act, only 1.9 percent were strongly against it. 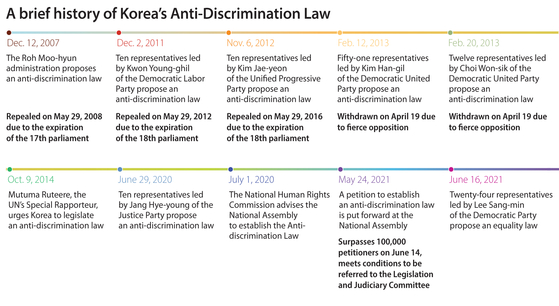 This is not the first time that an anti-discrimination law has been brought before the National Assembly. In fact, there have been seven proposals made from 2007 to 2013, starting with a proposal set forward by the Roh Moo-hyun administration in 2007. It was repealed when the 17th parliament expired on May 29, 2008. The same happened for a proposal put forward by Rep. Kwon Young-ghil and nine others in 2011, which was repealed on May 29, 2012, as well as a proposal by Kim Jae-yeon and nine others in 2012, which was repealed on May 29, 2016. Fifty-one representatives led by Kim Han-gil and 12 representatives led by Choi Won-sik, respectively, put forward their proposals in February 2013 but withdrew their agendas after fierce opposition.

Rep. Kim Han-gil explained in a press release the reason he revoked his own decision was because conservative Christian communities had an “extreme reaction” to the proposal and bombarded his office with phone calls and emails “with violent words that cannot be said out loud.” Kim and Choi said they were withdrawing their proposals to jointly issue a new one, which never happened.

There are currently two proposals that await a decision from the Legislation and Judiciary Committee — one made by Rep. Jang Hye-young of the Justice Party last year and one by Rep. Lee of the Democratic Party. Although the two differ in name, they share the commonality of banning all forms of discrimination without a just cause in employment, education, the use or provision of administrative services or commercial services or products, based on: sex, gender identification, sexual orientation, age, nationality, disabilities, history of disease, race, skin color, place of birth, physical conditions, marital status, pregnancy or childbirth, family status, religion, political opinion, criminal record, educational status, employment form, social status or any other reason.

On the day that Rep. Lee announced his proposal, The Communion of Churches in Korea (CCIK) released an official statement opposing the establishment of the equality law because “it aims to fulfill its bigger goal of realizing gender ideology on the pretense that it protects social minorities from hate and discrimination,” saying that the law will “reverse-discriminate the absolute majority and open wide the gates to homosexuality and same-sex marriage.” It added that discrimination against those who are “truly weak in society such as females and people with disabilities” can be dealt with using existing laws and the only reason the anti-discrimination law is being pushed forward is to legalize homosexuality and same-sex marriage.

The CCIK’s concern, however, is shared by most people who oppose the establishment of the law, not just the conservative Christian community. A part of a Blue House online petition with 1,551 signatures from October last year titled “Absolute opposition against comprehensive anti-discrimination law!” reads, “If this law is passed and you say things like ‘homosexual intercourse is dangerous’ or ‘I am against it,’ then you could end up paying compensation.” The National Assembly petition submitted by Gil also expressed concerns that the equality law will infringe people’s freedom of speech and religion and that individuals can be punished for comments made in their private lives.

In July last year, Christian members of the People Power Party held a press conference and said that they opposed the act based on three reasons: You could get punished just by saying something discriminatory; Freedom of religion and expression will be restricted; And that existing laws already protect people from discrimination. 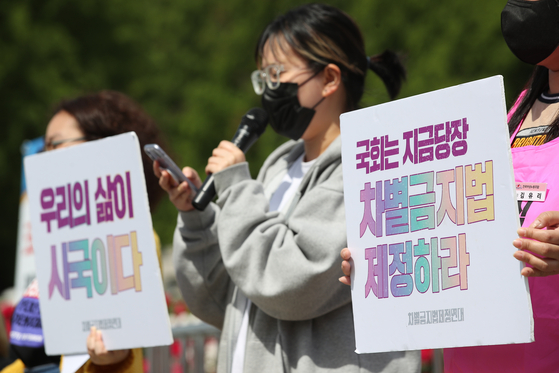 A coalition of women's rights organizations holds a protest outside the National Assembly in western Seoul on May 26 to urge the establishment of an anti-discrimination law. [YONHAP] 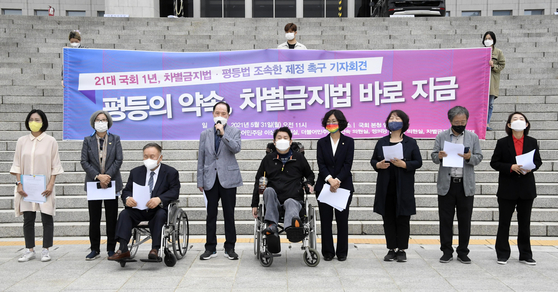 
However, advocates say that an anti-discrimination law will actually guarantee people’s freedom of religion and expression. Last year, the Christian community came under fire when a cluster of Covid-19 infections broke out at a church in Daegu and hateful messages were aimed at Christians for practicing their beliefs amid a pandemic. Some shops and restaurants even put up notices that read, “People who go to church may be asked to leave,” and that’s exactly the kind of ungrounded discrimination that the law aims to address, said Cho Hye-in, attorney and co-director of South Korean Coalition for Anti-Discrimination Legislation.

“People have very far-fetched concerns that the law will oppress people and their rights to religion and expression, but the law is meant to protect people from oppression — not punish those at the other end,” said Cho. “The law lays out 23 very specific cases that could be used as the grounds of discrimination and that they should not be used against a person in employment, education, the use or provision of administrative services or commercial services or products. It does not limit anyone’s freedom of speech, but will only go into effect when hateful speech turns into hateful actions that have actual consequences in employment, education or services.”

The clause in the law related to discrimination “without a just cause” is also crucial, says Cho. The Korean judicial system is known for its conservative — a euphemistic way of saying lenient — rulings, so it’s highly unlikely that anyone will be punished for simply expressing themselves. And if they can prove that their discriminatory act was inevitable, such as banning male-to-female transgender athletes from competing in an all-women’s sports, then they shouldn’t have to worry about paying large sums of compensation that rumors say they will have to.

“More importantly, people should remember that freedom isn’t about oppressing or discriminating other people,” Cho said. “There was a time when sexual harassment wasn’t considered a crime in the past, but now everyone knows that it’s wrong. Discrimination is like that. Society hasn’t been aware of its wrongdoings until now, so there are bound to be issues that will arise from people accepting the fact their actions may have been wrong. But this is a burden that everyone needs to share together in order for us to become a more just and fair society.” 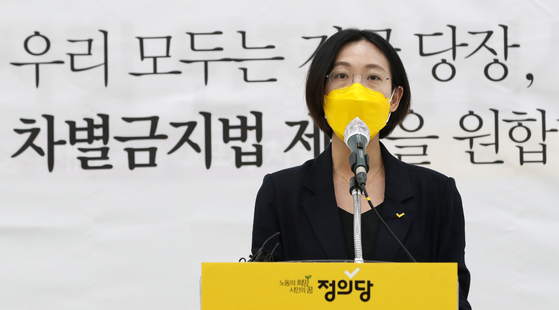 Rep. Jang Hye-young of the Justice Party holds a pres conference on June 15 to urge the National Assembly to pass an anti-discrimination proposal. [NEWS1]

“If someone, an old woman with disabilities who’s not from Korea was discriminated against, then it’s hard to pinpoint what exactly caused the discrimination, in which case existing laws cannot properly remedy the problem,” said Jang. “There is a reason why other countries such as Britain and the United States have established anti-discrimination laws — to remedy complex discrimination cases. The law will not only act as a declaration against discrimination, but provide an effective means of protection for the inequalities that take place in real life.”

While the two proposals by Reps. Jang and Lee await a decision from the National Assembly, both advocates and opponents are actively promoting their sides at various events. Opposing voices may be just as loud as those fighting for the establishment of the act, but Rep. Jang believes that the chances are higher than ever for the act to push through. And ironically, she credited the Covid-19 pandemic as having given the law the push it needs.

Leave intact the intrinsic function of the ministry

Survival of the friendliest (KOR)

Does Biden understand the seriousness?