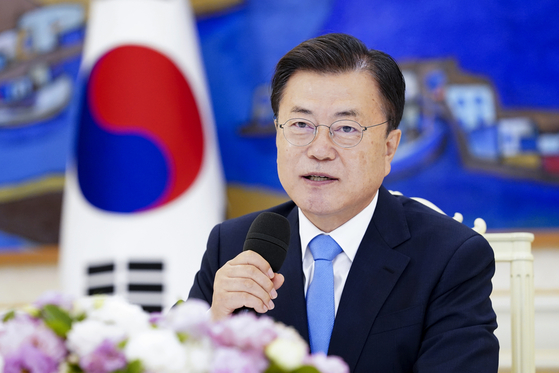 President Moon Jae-in stresses that the Korea-U.S. alliance serves as the linchpin for the peace and prosperity in the region to members of the U.S. Congressional Study Group on Korea (CSGK) who visited the Blue House Friday. The U.S. lawmakers, including Rep. Young Kim of California, during their visit to Seoul stressed the importance of trilateral cooperation with Japan, among other issues. [NEWS1]


President Moon Jae-in has issued an ultimatum to Japan, saying he will consider a meeting with Prime Minister Yoshihide Suga at the Olympics only if a substantial agenda is set.

"The final position of the Blue House is that it can consider President Moon's visit to Japan only if there is sincere discussion of at least one of three pending issues to be resolved with Japan," a senior Blue House official told the JoongAng Ilbo by phone Sunday.

"If Japan doesn't show a forward-looking attitude to the end, Moon will have no choice but to announce he will not be attending the opening ceremony," the official added.

The official suggested a deadline of "early this week" for a satisfactory response. Korea and Japan have been discussing Moon's attendance at the July 23 opening ceremony and a formal meeting between him and Suga coinciding with that visit.

"We all know that these are difficult issues to be resolved at a single summit, but Korea's position is that the future can be pursued only when the leaders of Korea and Japan at least start consultations on urgent issues," the official added.

The current position is a step away from the Blue House's initial proposal that the leaders put all the key issues on the table for a "one-shot" negotiation.

The Blue House has been stressing that it would hold a summit only if some "achievement" could be guaranteed.

"Beginning consultations can also be accepted as an achievement," the official said, adding that "now is the time for the Japanese government to give a sincere response," indicating that the ball is in Tokyo's court.

The Japanese government conveyed to the Korean side that it accepted a request for a meeting should Moon attend the opening ceremony, the Nikkei reported Sunday, saying that discussions are ongoing.

The newspaper reported that Korean Foreign Minister Chung Eui-yong is expected to accompany Moon when he visits Tokyo, and that the two governments are also coordinating another visit by Chung to Japan in August to hold talks with Japanese Foreign Minister Toshimitsu Motegi.

The two leaders have yet to hold a formal meeting since Suga took office last September, though Moon exchanged brief greetings with the Japanese prime minister at the G7 summit in Cornwall, England, last month. The last summit between Moon and his Japanese counterpart was in December 2019, when he sat down with then Japanese Prime Minister Shinzo Abe in Chengdu, China.

In a slight change of tone since last month, Suga said during a press conference last Thursday when discussing whether he would have a summit with the Korean leader, "If President Moon visits Japan, we will, of course, receive him with diplomatic courtesy."

But Suga noted that Japan-Korea relations are in a "very difficult state right now" because of the forced labor and wartime sexual slavery issues and the Japanese call for Korea to "resolve" these issues.

Japanese media said that the two sides are working to fine-tune details of a possible first meeting between Moon and Suga, such as the length, reporting that Seoul wants a one-hour meeting, while Tokyo is pushing for a shorter meeting.

Such a short meeting would likely only provide an occasion to convey existing positions rather than an opportunity for discussions that would allow for headway on difficult issues such as historical disputes stemming from Japan's 1910-45 colonial rule over Korea.

The Blue House said that the Japanese government has yet to extend a formal invitation to Moon, but it indicated it will remain open the possibility of the president's visit to Japan to the 11th hour.

The Blue House official told the JoongAng Ilbo Sunday that it is "not too fixated" on the length of the meeting, so long as it is a proper summit where the foreign minister and security advisers can attend.

Washington has been pressuring its allies to improve their relations as a part of its strategy of strengthening cooperation on mutual regional concerns such as North Korea.

"President Moon's visit to Japan must also be understood in the context of restoring the key alliance as demanded by the United States as a foundation for its policies toward China and North Korea," a high-ranking Korean government official said.

A Korean Foreign Ministry official in a statement Sunday expressed "strong regret" over Japanese officials' leaks of discussions over a possible summit, noting the consultation process could be hindered unless Tokyo responds prudently.

The official confirmed that the two sides have been looking into a summit if it can "create momentum for the resolution of bilateral pending issues" and proper formalities are observed.

Korean Minister of Culture, Sports and Tourism Hwang Hee told foreign correspondents in Seoul Friday that "a meeting of the leaders of the countries would be meaningful in itself."

Noting that the Olympics are symbolic of "peace and reconciliation," he said that it would be a "very good opportunity" to hold a Korea-Japan summit, likewise stressing the importance of separating sports from politics.

Hwang is already scheduled to visit Japan for the Summer Olympics.

The coronavirus is another factor as Japan last Thursday declared a state of emergency for Tokyo from Monday to Aug. 22, which covers the Olympics that run through Aug. 8, due to the spike in Covid-19 cases in the Japanese capital. The Japanese Olympic Committee said Tokyo venues will prohibit spectators for the Summer Games due to the state of emergency.