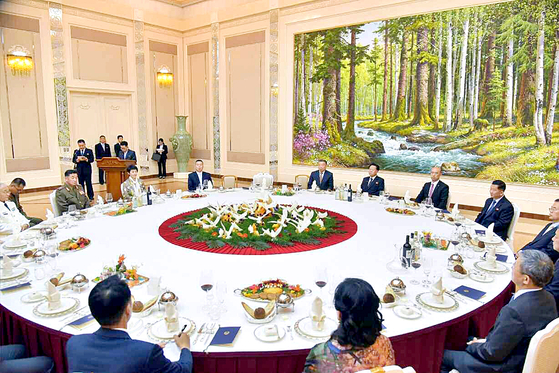 The State Affairs Commission of North Korea on Friday held a banquet Friday for the Chinese ambassador in Pyongyang to mark the 60th anniversary of the signing of the friendship treaty between the two countries. [NEWS1]


The leaders of North Korea and China pledged greater mutual assistance and cooperation on the 60th anniversary of their treaty of friendship through a letter exchange, according to the North's state news agency on Sunday.

In his letter to Xi, Kim described the friendship between the two countries as growing in vitality, especially in the face of what he called “hostile forces” around the world.

“Despite the unprecedentedly complicated international situation in recent years, comradely trust and militant friendship between the DPRK and China grow stronger day by day,” Kim wrote, according to the KCNA.

Xi wrote back that he looked forward to strengthening “strategic communication” between the two countries and called the 1961 treaty as laying "important political and legal foundations for consolidating the militant friendship” between China and the North.

The Rodong Sinmun, the official newspaper of North Korea’s ruling Workers’ Party, published a weekend editorial describing Sino-North Korean cooperation as a “powerful weapon” to win what they called a potential “anti-imperialist war” and defend socialism.

“As imperialists now have united and are plotting to isolate and crush socialist countries, it is necessary for North Korea and China to further develop their friendly relations based on the spirit and principles of the bilateral treaty,” the editorial said.

North Korea's foreign ministry on Sunday promised that the country would continue to strengthen and develop relations with Beijing.

“The DPRK and the PRC, firmly convinced of the justness of their socialist cause, are now staunchly advancing toward a bright future by smashing the high-handedness and desperate maneuvers of the hostile forces on the strength of militant friendship and blood ties even under the complicated international situation,” the ministry said on its website, using the North’s preferred acronym for its official name, the Democratic People’s Republic of Korea.

The exchange of anniversary messages comes 10 days after Kim sent a letter congratulating Xi on the centennial of the Chinese Communist Party’s establishment. In that message, he pledged to prioritize and elevate relations with China.

The mutual expression of friendship between Beijing and Pyongyang comes at a time when nuclear talks between the United States and the North remains at an impasse, and China and the United States are locked in escalating trade and technological competition.

The roots of the alliance between the North and China lie in the Korean War, when the Chinese People’s Liberation Army crossed the Yalu River and entered the war on the side of the communist North as most of its territory was taken by United Nations forces defending South Korea.

Beijing and Pyongyang have described their respective countries as close as “lips and teeth,” an expression which dates back to the war.

The two countries signed their treaty of friendship on July 11, 1961. Under the terms of the treaty, they are obliged to come to aid of each other should the one face an attack.

China remains the only major ally and the biggest trading partner to North Korea, accounting for 90 percent of the North’s external trade, despite efforts by South Korea to encourage the North to open trade and develop domestic industries.

However, bilateral trade has dropped dramatically since the start of the Covid-19 pandemic, with exports and imports between the two plummeting 80.7% in 2020 to $539.05 million, according to China's General Administration of Customers.

Kim sends his congrats to Xi for 'splendid' Olympics