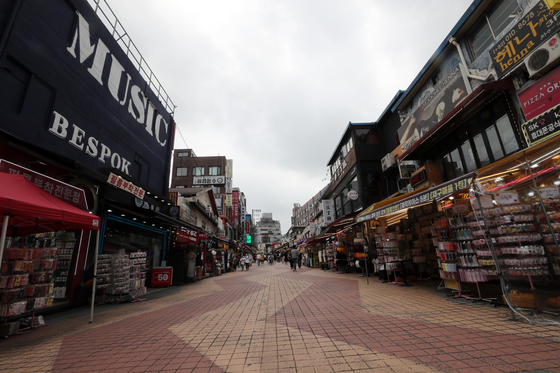 A street in Hongdae, one of the busiest entertainment districts in Seoul, is nearly empty on Sunday, as the greater Seoul area is set to adopt the strongest virus curbs amid a spike in cases tied to private gatherings and bars in Hongdae. [NEWS1]


Starting Monday, gatherings of more than two people after 6 p.m. will be banned for two weeks in Seoul, Gyeonggi and Incheon, as Korea faces the worst spike in Covid-19 cases since the outbreak began last year.

Level 4 — the toughest of the four-tier distancing rules — will be enacted in the greater Seoul area from Monday through Sunday, July 25.

Health authorities urgently announced a semi-lockdown on Friday, after the country set a record for the highest number of new infections reported in a single day with 1,316 people testing positive on Thursday.

That record was broken the following day, when 1,378 people tested positive, and the virus figure stayed in the 1,300s for a third straight day on Saturday. More than 500 new cases have been reported in the capital alone for five consecutive days.

The social distancing level will be reviewed in two weeks.

Under Level 4, gatherings of only two people will be allowed in public between 6 p.m. and 5 a.m. to minimize contact between people. At other times of the day, up to four people will be permitted.

Fully-vaccinated people will no longer be excluded from the limit on private gatherings.

Fines of up to 100,000 won ($88) will be levied on individual violators, and additional fines can be imposed for related costs if a violation leads to a Covid-19 infection. A fine of up to 3 million won ($2,640) will be imposed on operators of facilities if they break the rules.

Starting Monday, there will be no exceptions made for immediate family gatherings, which were permitted to gather with up to eight people until Sunday.

However, gatherings with family members living under the same roof, or with caregivers of a child, elderly or disabled person, will be excluded from the count. Thus, more than three family members who live together will be able to dine out. Exceptions will also apply for people visiting a dying family member.

Amateur sports teams will still be allowed to play, but squads are limited to 1.5-times the number of players on a team at any given moment. For example, the total number of players attending an indoor futsal match, which is played with five players on each team, cannot exceed 15.

All public events, including protests and rallies, are prohibited under Level 4.

Sports events will be played without spectators and churches and religious facilities have to hold all services online.

Concerts in official performance venues will still go ahead with up to 5,000 people permitted in assigned seats, but concerts at other venues such as stadiums, arenas and parks will be canceled.

Up to 49 people are permitted to attend weddings and funerals, but they have to all be relatives of the bride and groom or deceased person.

The current 10 p.m. business curfew for restaurants, bars and cafes will remain in effect — however, clubs and bars that involve dancing have to shut completely.

Indoor gyms can operate until 10 p.m., but contact sports like boxing are prohibited. Shower rooms will also be closed.

Group exercise classes such as spinning and aerobics are permitted, but cannot play fast tempo music. Similarly, the speed of treadmills should be kept slower than 6 kilometers per hour (3.7 miles per hour). This is to prevent droplets and sweat from intense exercise.

Kindergartens, elementary, middle and high schools, as well as schools for students with special needs, in the greater Seoul area will have to hold classes virtually for the rest of the semester before the summer vacation.

Schools in Gyeonggi and Incheon will hold remote classes starting Monday, and in Seoul from Wednesday.

Face-to-face teaching for students who need special care, however, will be allowed in exceptional circumstances. After-school care programs in kindergartens and elementary schools will be allowed to operate to minimize the burden on parents.

With about 40 days left until the start of the fall semester, the plan to have all schools fully reopen remains in place for now, the Education Ministry said, but could be reconsidered if the virus spread isn’t brought under control. 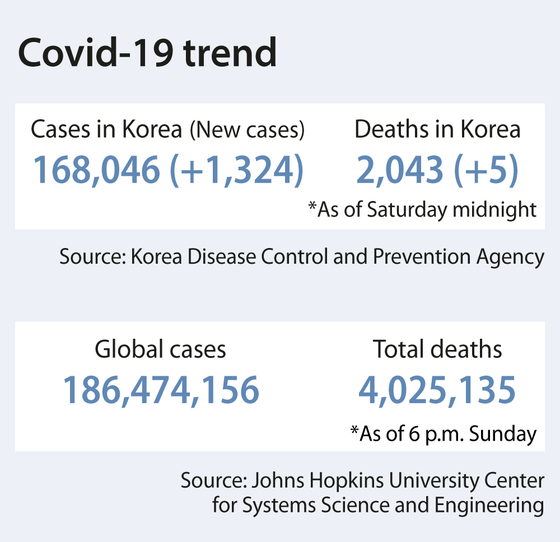 Korea added 1,324 new Covid-19 cases on Saturday, the highest tally for a weekend since the outbreak began. The figures, released on Sunday, are usually lower due to fewer tests being conducted over the weekend. There were 1,280 local infections, raising the total caseload to 168,046.

Of local cases, 964 people, or 75.3 percent of the total, were registered in the greater Seoul area — with 501 patients coming from Seoul, followed by 399 from Gyeonggi and 64 from Incheon.

Among the major clusters, infections connected to bars in Mapo District in western Seoul and English hagwon (cram schools) rose to 355 as of Sunday, including people infected with the more contagious Delta variant.

A cluster that began at Hyundai Department Store’s Coex branch in southern Seoul has infected 109 people so far, and the department store extended its closure to Monday.

The virus spread outside the capital area, which is mostly under the eased Level 1 distancing scheme, is also gaining pace.

Virus cases in non-metropolitan regions also hit a record-high with 316 patients, or 24.7 percent of the total. The last record was on Jan. 4, the peak of the third wave of the pandemic, with 300 cases.

Around 3.52 million people will be eligible to get the Moderna jab, which will be administered from July 26 through Aug. 7 at medical institutions nationwide.

Those who wish to get their shot can make a reservation through the national vaccine registration website (ncvr.kdca.go.kr). They can also sign up by calling the Korea Disease Control and Prevention Agency (KDCA)'s 1339 hotline or their local government’s call center.

Starting Tuesday, workers in virus-vulnerable sectors with high rates of contact with other people, including transportation workers, street cleaners, delivery workers and hagwon teachers in Seoul and Gyeonggi will receive Pfizer shots supplied by Israel.