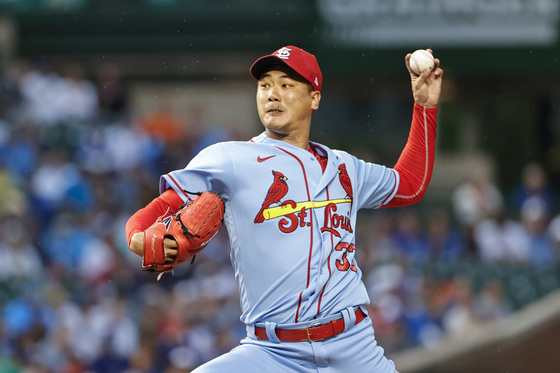 
Kim Kwang-hyun pitched a remarkable outing against the Chicago Cubs on Saturday, throwing seven strikeouts in six scoreless innings to lead the St. Louis Cardinals to a 6-0 win at Wrigley Field in Chicago.

Kim's third win in a row was just as impressive than the previous two. On July 5 the MLB sophomore pitched seven scoreless innings, possibly his best performance in the majors to date, a feat he arguably surpassed on Saturday.

The Korean southpaw wasn't the only Cardinal that had a good day out. The bats were also impressive, throwing up five runs in the fifth alone to provide Kim with plenty of run support.

Before he even took to the mound at the bottom of the first, Kim already had a one run cushion to start things off.

Kim started as he meant to go on — with a four-pitch strikeout to Willson Contreras. Back-to-back singles followed, but the starter quickly dealt with the threat, forcing Javier Baez into a double play to end the inning.

The second started with two strikeouts, but a runner still reached first on a wild pitch. Undeterred, Kim quickly forced another double play to end the inning.

Like the first two innings, the third started with a strikeout. A flyout followed for the second out, before Kim once again allowed some runners on — this time via a single and a walk — before a second flyout ended the inning.

A short wobble at the start of the fourth saw Baez reach first on a single and then steal second on a wild pitch. A runner on second with no outs was the biggest risk Kim had faced in the game so far, but he quickly took care of the danger with two strikeouts and a pop out to end the inning.

When Kim took the mound in the fifth it was a very different ballgame. At the top of the inning the Cards had hit three home runs to take a 6-0 lead, giving the Korean starter a huge cushion to lean back on. Kim did his part, retiring the cubs in order on nine pitches with a lineout, a pop out and another strikeout.

The sixth was more of the same, with Kim now relying on the position players to get the job done. A quick flyout and a lineup had the Cubs on the fence before Baez hit another single to get on base. Kim's final out of the game was a fitting one — a grounder hit straight back to him which he calmly threw to first for the out.

Kim left the game in the seventh with the score at 6-0. Neither side got anything across in the final few innings.

Kim pitched six scoreless innings, allowing five hits and one walk while striking out seven. As a result, his ERA dropped to 3.11.

Saturday's win follows a 5-3 win against the San Francisco Giants on July 5 and a 7-4 victory over the Arizona Diamondbacks on June 30. Before that game, Kim hadn't picked up a win since April 23. He now carries a 2-5 line as the season nears the halfway point.

Kim spent some time on the injured list last month but appears to have recovered, although his ERA in June shows a significant drop off compared to previous months. Those woes seem to be over — with 13 innings pitched in July, Kim currently carries a 0.00 ERA for the month. Kim has also had some fun at the plate, with a .250 batting average for July.