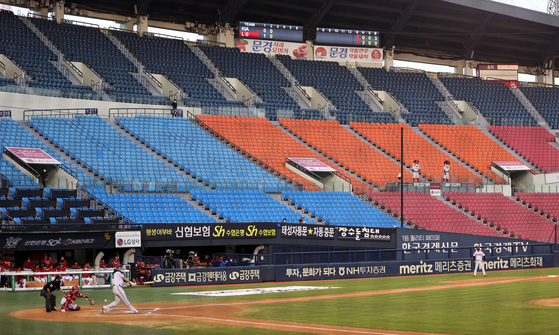 The LG Twins, in white, play the Kia Tigers in an empty Jamsil Baseball Stadium in southern Seoul on Aug. 18, 2020. [YONHAP]


All stadiums in the greater Seoul area will close to fans on Monday as the government raises the social distancing level to the most stringent Level 4.

As well as the domestic baseball and football leagues, the new measures mean that two international fixtures between the Korean U-23 Olympic football team and Argentina and France will be held in empty stadiums.

Level 4 is the most stringent social distancing level, and is applied to Seoul, Incheon and Gyeonggi starting Monday until July 25.

Five K league 1 and six K league 2 fixtures held in the greater Seoul area will be without an audience.

In the KBO, three midweek series and one weekend series will also be impacted, although how many of those games will actually be held with an ongoing outbreak in the league remains unclear.


The U-23 team have two friendlies scheduled before the 2020 Tokyo Olympics begin, the first against Argentina at 7:30 p.m. on July 13 at Yongin Mireu Stadium in Yongin, Gyeonggi, and the second against France at 8 p.m. on July 16 at Seoul World Cup Stadium in Mapo District, western Seoul. Both will be played without an audience.