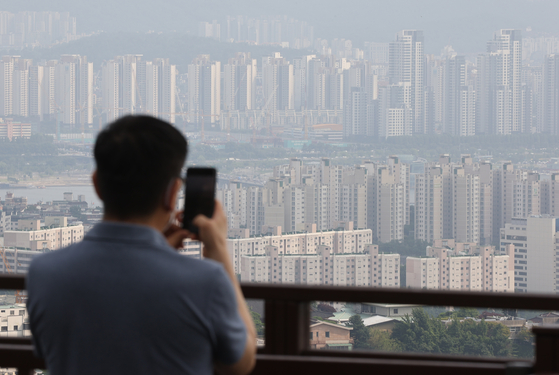 A bird's-eye view of apartments in Seocho, southern Seoul. [YONHAP]


Koreans are fleeing Seoul and moving to nearby areas due to soaring apartment prices, neighborhoods targeted becoming more expensive as a result.

According to Statistics Korea, 44,118 people left Seoul between January 1 and May 31 this year on a net basis, with an average net outflow of 8,823 per month. Net outflow is calculated by subtracting the number of people moving out from the total number moving in. At this rate, net outflow would total 100,000 people this year, up 54.2 percent on year.

More Seoulites are leaving, and rising apartment prices is the biggest cause. People are unable to afford apartments in high-end neighborhoods or even in places that were once considered cheap.

People have left Seoul to avoid high apartment prices, but the recent exodus is fanning price surges in areas bordering Seoul, such as Incheon and Gyeonggi. Those areas are considered to be cheap but close enough to Seoul, becoming popular among people moving out.

“Demand is rising in Incheon, Hwaseong and Bucheon, which have missed the recent surge,” said Ham Young-jin, head of Zigbang’s big-data lab. “As apartment prices are being pushed up, the prices of cheaper low-rise housing units are also rising.”

The government recently changed its strategy for controlling price increases, from regulating to increasing supply.

But this takes time and can run into roadblocks.

Government-leased apartments are often for low-income families. Residents and landlords worry the buildings would hurt the neighborhood’s image and drive down values.

Plans to build 10,000 government-leased apartments at the Taereung Golf Course, owned by the government, are also facing similar resistance as residents demand the government turn the golf club into a public park that would benefit the community.

On June 11, Land Minister Noh Hyeong-ouk said the ministry will reduce the number of houses to be built in Taereung and is in talks with local governments to find alternative sites to build the government-leased apartments.