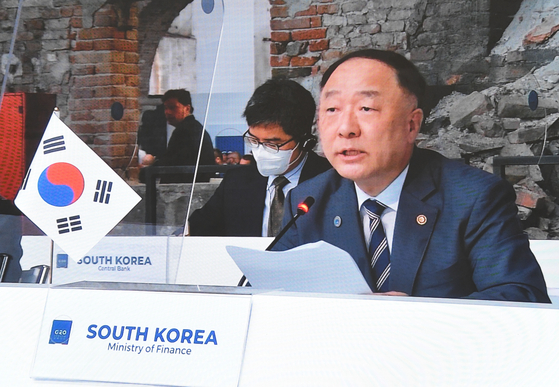 
Finance Minister Hong Nam-ki put his foot down on stretching the supplementary budget while acknowledging the economic risks of the recent surge in Covid-19 cases.

“It’s not easy to increase the size of the supplementary budget,” Hong, who is in Italy in attending the G-20 meeting on Saturday, said. “The additional amount will have to be made in January or February through next year’s budget.”

He especially stressed that selling more bonds to increase the size of the budget is a non-starter.

With the number of daily cases averaging more than 1,000 for days running and fear of the Delta variant on the rise, Democratic Party lawmakers are pushing to increase support for small businesses and up the emergency relief grants.

On July 1, the government proposed a 33 trillion won ($28.8 billion) supplementary budget, with 10.4 trillion won to be spent on 250,000 won payments to all Koreans except for the top 20 percent in terms of income.

The government estimates that businesses receiving compensation will be paid about 960,000 won.

Finance Minister Hong said he was aware of the risks related to the rising number of cases.

He said the situation would be seriously problematic if the number daily cases exceeds 1,000 through the end of this year.

“So far, the figures are only for a week, and therefore we need to look at the situation further,” Hong said.

The Finance Minister said when the government was working on its second half economic policy plan, which raised the economic growth target for this year from 3.2 percent to 4.2 percent, it had discussions with the health authorities and included the possibility of changes in policy.

“We were planning to utilize spending coupons for restaurants and gyms when the number of adults inoculated exceeds 50 percent, which we estimated to be around mid-August, and expand that to hotels and other tourism-related facilities when that figure reaches 70 percent, which we estimated to be around end of September,” Hong said. “But with the number of people confirmed with Covid-19 reaching 1,200, there are those that question if we could achieve our goal by the end of August or end of September.

“Obviously we will have to follow through with our policies according to the situation. And the government already gave that some thought when planning out the second half.”

He stressed that the government is doing all it can.

“We are trying to provide what’s needed,” Hong said.