Stocks rebound as foreigners dip toes back in the water

Stocks rebound as foreigners dip toes back in the water 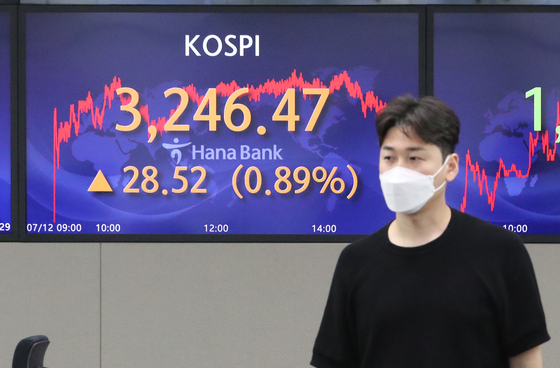 A screen in Hana Bank's trading room in central Seoul shows the Kospi closing at 3,246.47 points on Monday, up 28.52 points, or 0.89 percent, from the previous trading day. [YONHAP]


Stocks rebounded to snap a three-day losing streak Monday as investors sought to buy oversold stocks after the benchmark index took a breather the previous session amid escalating virus concerns. The won rose against the dollar.

Stocks started strong after the Kospi retreated 2.64 percent in the past three sessions amid rising concerns over the fourth wave of the pandemic in the country.

Stocks remained in positive terrain throughout the session on foreign buying, backed by market optimism that second-quarter corporate earnings would be better than expected amid signs of an economic recovery at home and abroad.

"They seem to be relieved by the U.S. Fed's confidence about the economic recovery," he added.

But investors remain wary of the worsening virus situation here as the greater Seoul area is under the strongest level of virus curbs. The country's daily Covid-19 infections topped 1,000 for the sixth consecutive day, and non-Seoul areas are reporting more cases.

The local currency closed at 1,147 won to the dollar, down 2.1 won from the previous session's close.