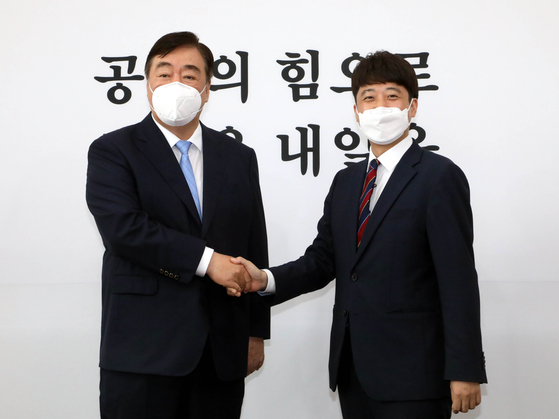 
Lee Jun-seok, new leader of the largest opposition party, told China's ambassador that he expects Beijing to be a responsible member of the global community that respects international norms.

Lee met with Chinese Ambassador Xing Haiming at the National Assembly on Monday as the diplomat paid a visit to congratulate Lee on becoming leader of the People Power Party (PPP). Lee, 36, won a chairmanship race last month and is the youngest politician ever to head a political party in Korea.

“As China developed rapidly since the 1990s, I believe it will experience the same changes Korea experienced in its past of rapid growth,” Lee told Xing. “I hope we have an opportunity to share our experiences. We expect China to more actively participate in the international community and respect international standards.”

Lee said a country’s culture and social system must develop with its wealth and strength. “I hope China will develop in such areas so that it will be able to win other countries' respect,” Lee told Xing.

Korea and China are neighbors and major trade partners, Lee said, stressing that he wants the two countries to cooperate in economic and security issues in the region and on North Korea issues.

Following his meeting with Xing, Lee told reporters that he informed Xing about Korea's younger generation's expectations for a peaceful resolution to China’s efforts to restrain Hong Kong’s autonomy. “I have expressed our concerns, and the ambassador appeared to accept my expression,” he said.

Lee’s meeting with Xing took place hours after Bloomberg News released an interview in which the young politician spoke critically about Beijing.

“We’re definitely going to have to fight against the enemies of democracy,” Lee was quoted as saying in the report released on Monday. Lee, who participated in Hong Kong protests in 2019, said the pro-democracy movement in Hong Kong was reminiscent of Korea’s democratization movements in the 1980s. He said his fellow millennials will push back against Chinese “cruelty” in places like Hong Kong.

In the Bloomberg interview, which took place on Friday, Lee also spoke critically about the Moon Jae-in administration’s relatively gentle approach to China compared to other countries such as the United States on the issues of Hong Kong’s autonomy and violating human rights in Xinjiang.

“I can definitely say the Moon administration is leaning towards China,” Lee was quoted as saying, adding the Korean public is “not happy about it.”

Later in the day after his meeting with Xing, Lee said he does not agree with the criticism that he spoke inappropriately as the chairman of the largest opposition party, especially using the word “cruelty” to describe China in a media interview.

“Anyone who witnessed what happened in Gwangju in May 1980 will use the word ‘cruelty’ to describe it,” he said. “What I witnessed in Hong Kong was the police’s cruel oppression [of democracy protesters]. It’s better for me to use a candid expression for the sake of the people of Hong Kong.”

Lee, however, said he has no intention to politically exploit anti-China sentiment. “I was just talking about our people’s concern and what I witnessed [in Hong Kong],” he told reporters. “I have no intention to exploit it.”

A senior PPP lawmaker admired Lee’s straightforwardness. “It’s necessary for us to say what we have to say about China, as opposed to the DP, which devotes itself to China,” he said. “That’s not necessarily an anti-China stance.”