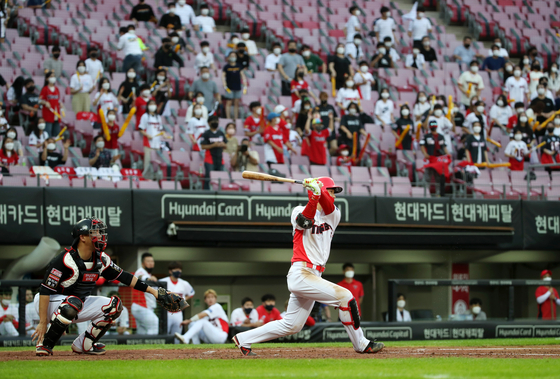 Choi Won-joon of the Kia Tigers hits a double at the bottom of the third inning in a game against the KT Wiz at Gwangju-Kia Champions Field in Gwangju on Friday. [YONHAP]


The KT Wiz held on to the top spot in the KBO after a turbulent week that saw heavy rain and a sudden outbreak of Covid-19 cases threaten to derail the league a week before it breaks for the Olympics.

A huge number of games were canceled throughout the week, first due to heavy rain in the southern part of the country and then because players with the NC Dinos and Doosan Bears tested positive for Covid-19. Only the SSG Landers actually managed to play all six scheduled games throughout the week, while the LG Twins were unable to play at all.

Rain was the cause of most cancelations last week, with only the Landers and Kiwoom Heroes managing to complete a series under the shelter of Gocheok Sky Dome in western Seoul. LG and Lotte were completely rained out down in Busan while KT and the Samsung Lions only managed one game in Daegu. The Kia Tigers and Hanwha Eagles also only played one game in Daejeon.

The Dinos and Bears played two midweek games before their series was interrupted for more sinister reasons. Thursday's game was canceled after a guest at the hotel where the Dinos were staying tested positive for Covid-19. The Dinos then tested all players with one testing positive. The Bears followed suit, getting two positive results, while the Dinos added one more.

That outbreak carried into the weekend with the full series between LG and Doosan and between NC and Kiwoom canceled. KT and Kia also missed out on a game on Saturday while the Tigers awaited test results having stayed in the same hotel as the Dinos a week earlier. Sunday's game between the two was also delayed after a Kia player had to suddenly quarantine having been classified as a close contact to one of the infected players. 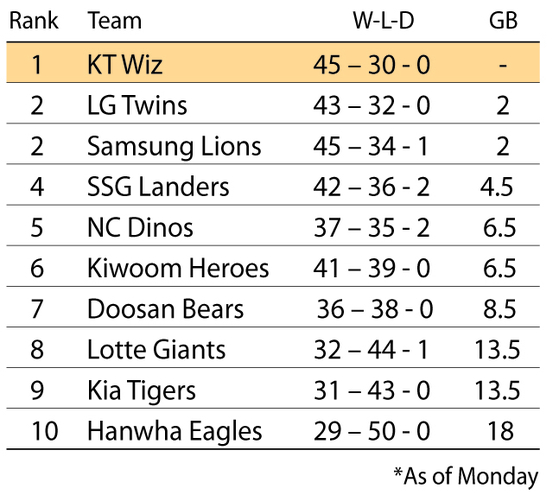 Away from the Covid-19 drama, the Eagles and the Landers and the Giants and Lions were able to play their series without interruption.

First-place KT dropped both of their games against the Tigers, 10-4, 2-0, but held on to the top spot mainly because the competition was out of action or also struggling.

The 10th-place Eagles took a surprise win over the fourth-place Landers, winning the first two games — 9-5, 3-1 — before dropping the final game 8-2.

Eighth-place Lotte took their first game against third-place Samsung, 9-5, but then dropped the following two games: 3-2, 11-0.

Due to the huge amount of disruption over the last week, the current standings remain unchanged. The Heroes briefly overtook the Dinos to take fifth place last week, but dropped back down to sixth going into the weekend.

The KBO would have had one week left to play before it breaks for the 2020 Tokyo Olympics on July 19, but because of the ongoing outbreak, the league on Monday made the extraordinary decision to cancel all 30 games that would have been played this week.

Instead the KBO will now break until Aug. 9, when it was scheduled to resume after the Games.