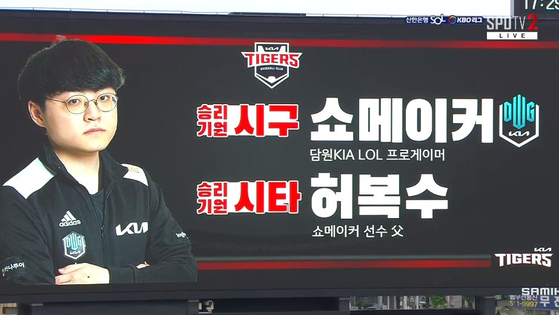 Tigers players donned special DWG KIA-themed uniforms for the occasion, while DWG KIA mid laner Heo "ShowMaker" Su threw out the first pitch to his father in the batter's box. ShowMaker and Tigers outfielder Choi Won-joon also exchanged signed uniforms and equipment — a bat for ShowMaker, a keyboard for Choi — prior to the opening pitch.

Stars from League of Legends Champions Korea (LCK) taking part in KBO festivities is nothing new. Players such as Lee "Faker" Sang-hyeok, Go "Score" Dong-bin, Song "Smeb" Kyung-ho, and Kwon "Sangyoon" Sang-yoon have also participated in similar events in the past.

During the televised segment, broadcast commentators admitted to not knowing much about esports but described ShowMaker as a player "on his way to becoming a living legend".

For the benefit of viewers unfamiliar with League of Legends esports, a loose comparison to KT Wiz's Kang Baek-ho was also made, which holds up surprisingly well in some ways — they're only a year apart in age, the two both debuted in 2018, quickly established themselves among Korea's best, and are capable of playing other positions on a professional level — although perhaps not in others — ShowMaker is already a world champion and is widely considered the best player in the world in his position, whereas Kang will likely have to wait another three years to attempt to compete in Major League Baseball, if he so wishes.

Earlier this year, when Kia Motors' sponsorship of Damwon Gaming was announced, ShowMaker shared that his father, Heo Bok-su, was a huge Kia Tigers fan and that he'd love to throw or receive a opening pitch one day.

Just as ShowMaker said, Heo Bok-su was clearly excited during the event and spun around in an exaggerated mock swing when his son's pitch went high. Fans around the world congratulated ShowMaker for giving his father — who many fondly call "ShowMakerMaker" — the experience of a lifetime.