Stocks rise on earnings optimism, hope for the economy

Stocks rise on earnings optimism, hope for the economy 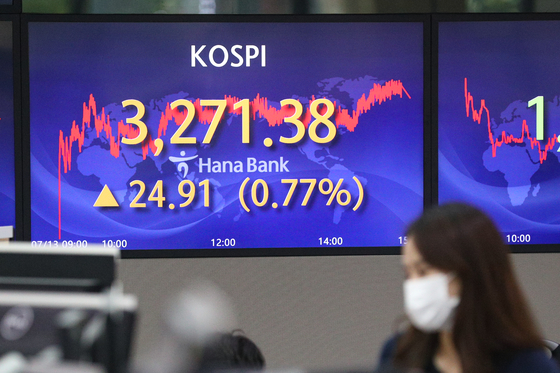 
Stocks advanced for a second consecutive session Tuesday, backed by strong foreign and institutional buying that stemmed from optimism for strong corporate earnings and economic indicators for the second quarter. The won rose against the dollar.

Trading volume was moderate at about 1.1 billion shares worth around 13.2 trillion won ($11.5 billion), with gainers outnumbering losers 643 to 207.

The Kospi got off to a good start despite concerns about the toughened social distancing measures in greater Seoul.

Stocks extended their gains in the late morning as strong earnings reports by U.S. financial companies fueled optimism for earning hikes globally and at home.

"There have been multiple boosters of [local] stock prices, such as the overnight U.S. rallies and strong won, as well as high hopes of the second-quarter earnings here and China's estimate-beating exports," Daeshin Securities analyst Lee Kyung-min said.

The local currency closed at 1,145.4 won against the dollar, down 1.6 won from the previous session's close.