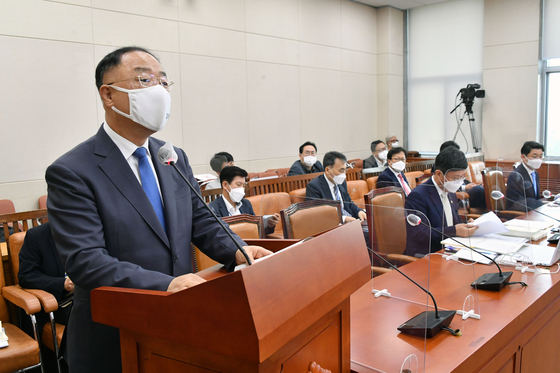 At the National Assembly’s Strategy and Finance Committee, Finance Minister Hong Nam-ki dug in his heels on who should be included in the latest round of Covid handouts.

The ruling Democratic Party (DP) has been demanding that all Koreans get grants, while opposition parties including the People Power Party (PPP) say only people in need should get them.

On June 29, the ruling party and administration agreed that relief grants would be given to Korean households except those in the top 20 percent income brackets. Two days later, the government announced the details of a 33 trillion won ($28.8 billion) supplementary budget, the sixth since the start of the pandemic and the second biggest ever.

According to the plan, relief grants of at least 250,000 won would be showered on 80 percent of households. It will be the fifth round of Covid-19 relief grants.

Prime Minister Kim Boo-kyum stood by the plan in his supplementary budget speech. “Some won’t be able to receive relief grants due to very small income difference,” he said on Thursday. “This is inevitable to give a little more help to those in more serious and urgent situations.”

The ruling party continued to push the idea of grants for all. DP Chairman Song Young-gil met with his PPP counterpart Lee Jun-seok on Monday evening and agreed to expand the grants to everyone. They also agreed to revise the supplementary budget to increase subsidies for small business operators. 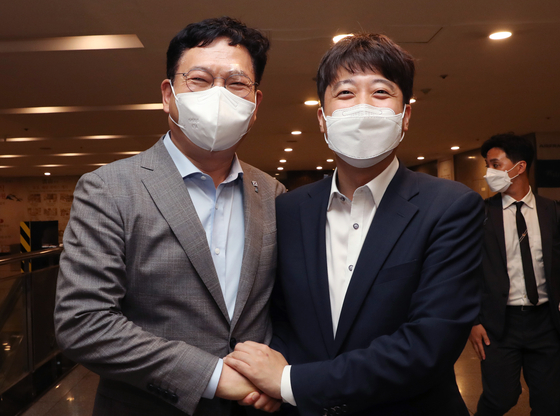 PPP Chairman Lee faced a serious backlash from his party for agreeing with the DP plan for relief grants for all, which goes against the party’s existing stance. The PPP’s floor leader and chief policymaker met with Lee late Monday night and expressed concerns.

Later Monday night, PPP spokeswoman Rep. Hwangbo Seung-hee issued a statement that practically reversed the deal. She said Lee agreed with Song that relief grants can be paid to all if there are any leftover resources.

Song and other DP politicians attacked Lee on Tuesday for scrapping the deal after 100 minutes, and Lee said he did not strike a formal agreement with Song. “It was more like a rough guideline,” he said. “I returned to the party and discussed it with our floor leader and chief policymaker and finalized our party’s stance.”

At the National Assembly’s Strategy and Finance Committee on Tuesday, Justice Party Rep. Jang Hye-young asked Finance Minister Hong about his opinion of the deal reached between Song and Lee. “I don’t agree with it,” Hong said.
DP Rep. Woo Won-shik pressed Hong to accept the ruling party’s demand.

“Politics should pave the way, and the government should follow,” Woo continued. “It is unacceptable that the National Assembly cannot make a decision because of the government’s resistance.”

“I do not think fiscal operations should follow a political decision,” he said. “The top 20 percent households suffered almost no decrease in incomes. We must be careful before making a decision to pay them relief grants by reducing the money that should go to lower income brackets.”

If the current supplementary budget bill is passed as is, the national debt will be increased to 963.9 trillion won. That amount has increased over 300 trillion won since the Moon administration began in 2017.