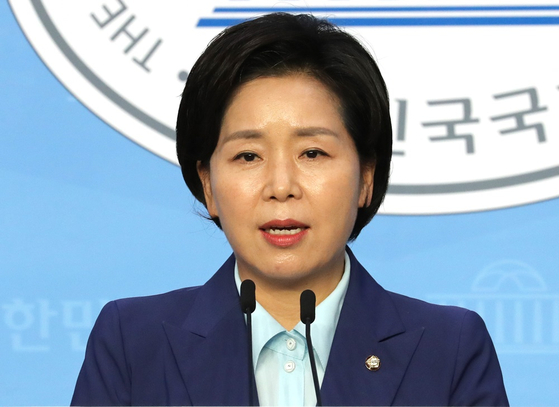 
The ruling party expelled Rep. Yang Hyang-ja for her handling of alleged sexual assault by her cousin, who worked in one of her offices.

The Ethical Tribunal of the Democratic Party (DP) held a meeting Monday afternoon and decided to expel Yang. The tribunal's decision still requires the Supreme Council's approval and a majority vote of DP lawmakers before Yang is actually expelled.

Yang, a former executive of Samsung Electronics, won her first lawmaker seat in April 2020 from Seo B District in Gwangju Metropolitan City. She served as a member of the Supreme Council of the DP from August 2020 through last April.

Shortly after Yang's legislative victory, she hired her cousin to work in her office in Gwangju. He was recently accused of sexually assaulting and harassing a female coworker for months.

After the accusation was made public, Yang issued a public apology and filed a petition to the Gwangju police on June 24 to investigate her cousin.

The DP still blamed Yang for a bad initial handling of the case. "Yang gave media interviews saying there was no sexual molestation in her office," the DP said in a statement. "Yang also offered a job to the victim in order to silence her."

"Members of the tribunal mostly agreed that she must be expelled," said Lee So-young, spokeswoman of the DP.

According to the DP, Yang attended the Ethics Tribunal meeting on Monday to defend herself. She has not said whether she will appeal the decision or not.

If DP lawmakers vote to expel Yang, she will be allowed to keep her seat in the National Assembly as an independent.

The expulsion is expected to deal a fatal blow to her political career. She will be prohibited from returning to the party for the next five years.

Yang is known for her unique career at Samsung Electronics. She joined the company in 1985 as an administrative assistant after graduating from high school. She climbed the ranks to become its first female executive without a college degree in 2014.

She was recruited into politics by then-party leader Moon Jae-in in 2015. She lost her first election bid in Gwangju in 2016 but won in 2020.

The police said Tuesday that it started a separate investigation into Yang's cousin on suspected violation of the political funding law. He was suspected of having ordered Yang's Gwangju office's accountant to forge documents to show the office had hired a ghost worker and paid it a salary.

The police said they are investigating how the money was spent and if Yang knew about it.