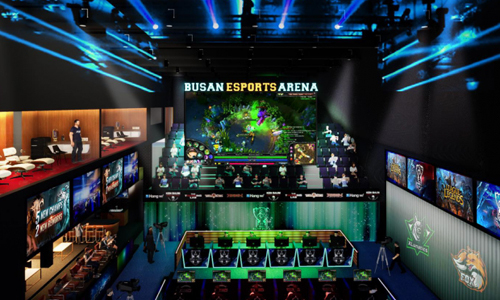 
Busan will become the new home of esports organization Sandbox Gaming, according to multiple reports from domestic media. Few details beyond Sandbox Gaming moving its headquarters to Busan have been revealed at this point in time.

According to Busan mayor Park Heong-joon, a three-year contract, open to extension under mutual agreement, will be signed between Busan city government and Sandbox Gaming on the 14th at city hall. Park, Sandbox Gaming CEO Lee Pil-sung, and Busan IT Industry Promotion Agency head Lee In-sook will be in attendance.

Bringing Sandbox Gaming to the city is different from what Busan has done over the years with GC Busan, as GC Busan was never a professional organization in the typical sense but rather an umbrella brand that the city used when sponsoring amateur esports squads.

Busan has traditionally been eager to host all kinds of gaming and esports-related events, as evidenced by Gwangalli Beach's historical legacy as an outdoors esports venue since 2004, and the city's continued hosting of G-STAR — Korea's largest gaming convention — since 2009.


How far this new geolocation will go beyond the nominal is unclear, however.

Sandbox Gaming has teams in a number of esports, including League of Legends, KartRider, and FIFA Online 4, but all of those squads are already competing as Liiv Sandbox per the organization's ongoing three-year naming rights deal with KB Kookmin Bank. It is unlikely that they will be able to additionally represent Busan in name.

Perhaps more importantly, League of Legends Champions Korea (LCK) Secretary General Lee Jung-hoon said in a July 1st interview with DailyEsports that the league was currently opposed to hosting regular-season matches at any of Korea's new regional esports arenas, as "a lot of capital went into building LoL Park" and Riot was not keen on letting their own venue go to waste so soon.

Busan, with their new Busan Esports Arena (Brena), will obviously be eager to push domestic leagues to adopt a home-and-away format that would highlight Sandbox Gaming's geolocation. Whether the idea will be as appealing to Riot Games Korea, which is in charge of LCK, or Nexon, which is in charge of KartRider and FIFA Online 4 esports, is a different question.

Even if league organizers were to entertain such a proposal from Liiv Sandbox, other teams who still have no home venue or city of their own may strongly oppose the idea of having to travel to Busan and back primarily for a competitor's benefit.

Getting to Brena takes roughly three hours from Gangnam, where many franchises' headquarters are currently located; it would not be surprising if some refused to occasionally take on more than six additional hours of travel. In fact, even Sandbox Gaming's current squads will probably remain in Seoul for the foreseeable future.

Geolocated franchising in esports has often been discussed but rarely put into practice. Ongoing overseas examples include the Overwatch League (OWL), the Call of Duty League (CDL) and the League of Legends Pro League (LPL). Out of the three, only the LPL, China's domestic League of Legends circuit, has been a clear success.

Korean esports has played with the idea of a region-based esports circuits for nearly two decades, although no domestic league of significance incorporating the model has ever been launched.

According to a 2020 interview with retired StarCraft: Brood War player Cha "ClouD" Jae-uk, the city of Daegu had worked on launching a Daegu-based StarCraft team as early as the mid-2000s, but the plan never came to fruition.