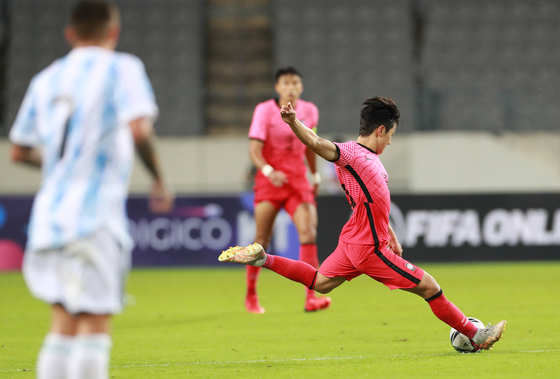 Lee Kang-in attempts a shot at a pre-Olympic friendly against Argentina on Tuesday at Yongin Mireu Stadium in Yongin, Gyeonggi. [YONHAP]


The Korean U-23 squad held Argentina to a 2-2 draw in a pre-Olympic friendly on Tuesday at Yongin Mireu Stadium in Yongin, Gyeonggi.

As the government raised the social distancing level to the most stringent Level 4 starting Monday for the greater Seoul area, the friendly was held behind closed doors.

Korea's three wildcard picks for the Tokyo Games were not including in the starting XI, with Song Min-kyu, Lee Dong-jun and Um Won-sang out in front, Kim Dong-hyun, Won Du-jae, Lee Dong-gyeong in midfield, Kim Jin-ya, Seol Younh-woo, Jeong Tae-wook and Kim Jae-woo in defense and Ahn Joon-soo in the goal.

Alexis Mac Allister, the central midfielder for the Argentinian team, opened the scoring in the 11th minute, when Won gave up the ball to Adolfo Julián Gaich, who crossed it to Mac Allister in front of goal.

Korea tried to seize the momentum and fight back quickly, with Um breaking through on the right to take a shot on target in the 16th minute, but failing to convert.

Head coach Kim Hak-bum was again busy on the bench with pen and paper, this time analyzing how his newly-picked players were doing as a team.

Unable to get anything more across, a water break was called at 30 minutes, under FIFA rules that allow breaks to be called any time after 30 minutes into a game played in extreme heat. The temperature in Yongin on Tuesday afternoon at points reached 30 degrees Celsius.

In the 34th minute, Kim Dong-hyun broke Argentina's defense to get the ball, passing it to Seol who gave it to Lee Dong-gyeong, finding the back of the net with a screamer that swerved past the Argentinian goalie, taking the score 1-1.

After Korea's successful equalizer, the Argentinian side was back at it, Mac Allister took a shot on target in the dying few minutes of the half but Ahn made a super save, managing to keep the score tied until the whistle blew.

After the break, both teams made changes going into the second half, Korea bringing on Lee You-hyun for Seol and Jeong Seung-won for Kim Dong-hyun, while Argentina made three changes.

The same story played out in the second half, with Carlos Fernando Valenzuela breaking through after about 10 minutes, beating Song Min-kyu's defense and curving the ball into the net to score a second goal for the South American team.

Head coach Kim took out the big guns on the 58th minute, with three big names heading on to the field.

But Korea was still unable to get anything across and the whistle blew once again for a second water break. 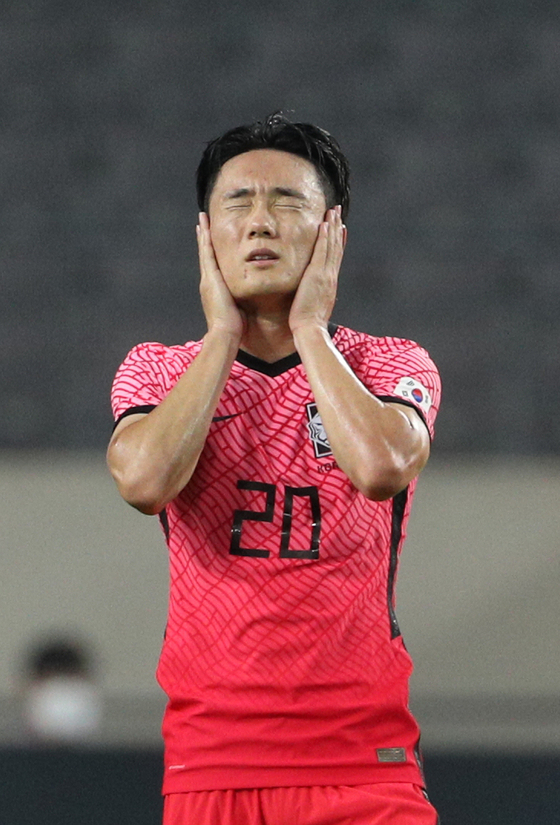 
Once again the water break did the trick, as Lee Kang-in's second shot on target in the 87th minute was blocked by the Argentinian goalkeeper, only to land in front of Um who smashed it home from outside the box, taking the game to a 2-2 draw with just two minutes on the clock.

Valenzuela attempted to shoot toward the goal in the dying seconds, but was unable to find the net and the game ended at 2-2.

Though Korea tied with Argentina, it is definitely a victory of sorts for the Korean team, drawing with the South American side with a phenomenal U-23 pedigree and Olympic gold medals at both the 2004 and 2008 Games. 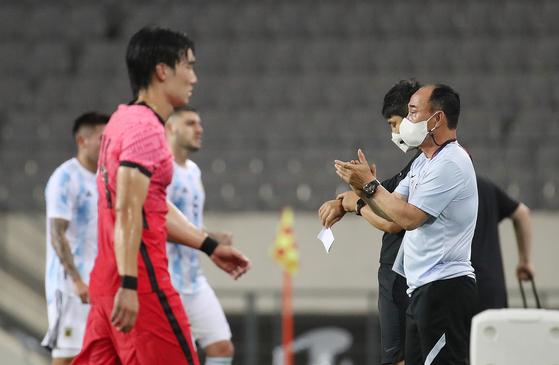 Head coach Kim Hak-bum claps after the Korean U-23 team drew with Argentina at a pre-Olympic friendly on Tuesday at Yongin Mireu Stadium in Yongin, Gyeonggi. [NEWS1]


The Korean U-23 team will play one last friendly before the Olympics, taking on France on July 16 at Seoul World Cup Stadium in Mapo District, western Seoul, also without an audience.

At the Olympics, Korea will first face New Zealand on July 22 at 5.pm. at the Kashima Stadium in Kashima, Japan. The second match will be against Romania on July 25 at 8 p.m. and the third match against Honduras on July 28 at 5:30 p.m.