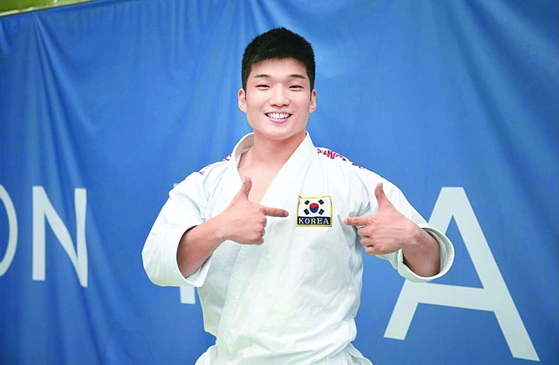 
Park Hee-jun will be a one-man Korean karate team at the 2020 Tokyo Olympics.

Karate is one of the five sports set to make an Olympic debut at the Tokyo Games, joining judo and Taekwondo as the third Olympic martial art.

A total of 40 male and 40 female karate practitioners, or karateka, will compete for eight gold medals available in Karate, divided into two disciplines: Kata and kumite. In kata there will be a single men's and women's competition, while in kumite there will be three separate weight classes for each gender.

In kumite, two karateka of the same weight class face each other in the tatami, a square competition mat, with athletes trying to land blows on target areas of their opponent.

No Korean athletes qualified for the kumite competition.

Park qualified for the men's kata, winning bronze at the 2020 Olympic Qualification Tournament in Paris on June 12 to earn his berth.

Kata is a demonstration of offensive and defensive movements, meaning "forms" in Japanese, with 10 men and 10 women competing for one gold medal at each event.

Seven judges give points to each athlete based on an overall assessment of their technique. Each karateka are given separate scores for technical performance and athletic performance on a scale of 5.0 to 10.0 in increments of .2. Five points is the lowest score possible and 10.0 is a perfect score.

Karateka can choose to perform a kata from the 102 katas approved by the World Karate Federation. Since practitioners have to perform a different kata in each round, they need to strategically decide which to perform against which opponent.

For example, karateka may choose not to perform their best kata against a stronger opponent, saving it for later in the tournament instead. As the choices of kata for each round are crucial, they are not revealed until the bout begins. 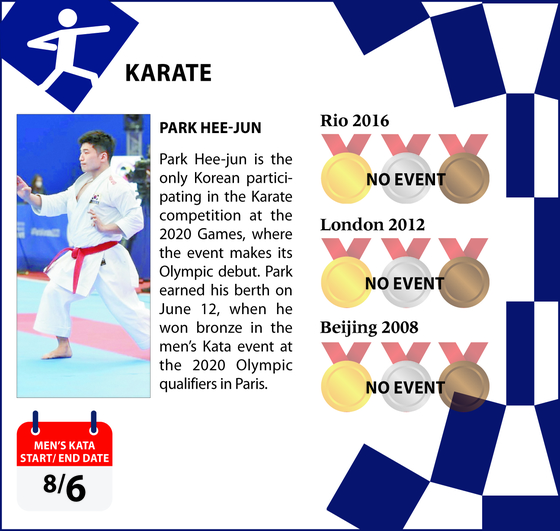 Park's favorite kata is the Ohan Dai, which he performed in the second round of qualifiers in Paris, beating Shahrjerdi Abolfazl of Iran with 25.98 points to 25.26.

The Tokyo Games may be Park's first and only chance at an Olympic medal because karate won't be at the 2024 Paris Games in three years.

Park will be able to compete at the home of karate in Japan, with the added gravitas of performing at the richly historied Nippon Budokan, where Olympic judo events took place during the 1964 Tokyo Games.

The karate events start on Aug. 5 with the women's kata. The men's kata starts at 10 a.m. on Aug 6 with the medal bouts following in the afternoon. The entire event finishes Aug. 7 with the men's and women's kumite.