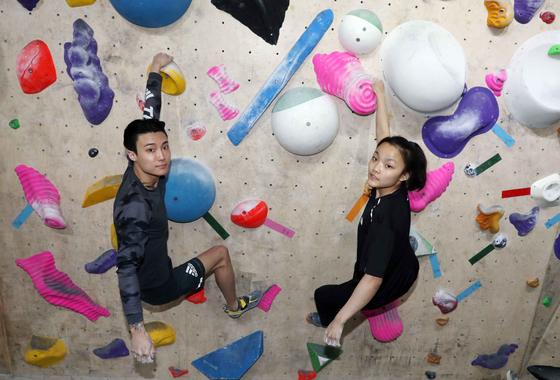 In speed climbing, athletes compete to see who can climb an identical 15-meter (50-foot) wall set at an angle of 95 degrees the fastest.

In bouldering, athletes climb different routes without ropes within 4 minutes. The routes vary in difficulty and athletes do not get to see them in advance.

In lead, athletes attempt to climb as high as they can on a 15-meter wall within 6 minutes.

The International Olympic Committee permitted sport climbing at the Olympics, but only as a single combined discipline — athletes have to compete in speed, bouldering and lead, with final rankings calculated based on all three scores. The athlete with the lowest score wins, with just one set of medals available for each gender.

Seo and Chon very nearly didn’t make it to the big stage, as they were given relocated Olympic berths on March 9.

The International Federation of Sport Climbing (IFSC) gave out 28 of the 40 Olympic spots — 20 each for men and women — based on the 2019 World Championship ranking.

The remaining spots were to be given to the highest-ranking athletes that didn't already have a berth from each continental championship, which would have been the Asian Championships for Korean athletes.

However, when the 2020 IFSC Asian Championships scheduled to take place in Xiamen, China from Dec. 10 to 13 were canceled due to the coronavirus pandemic, the IFSC had to come up with a new qualification system for the postponed Tokyo Games. As the next-highest ranking Asian climbers from the 2019 World Championship, Seo and Chon got their shot at Olympic glory. 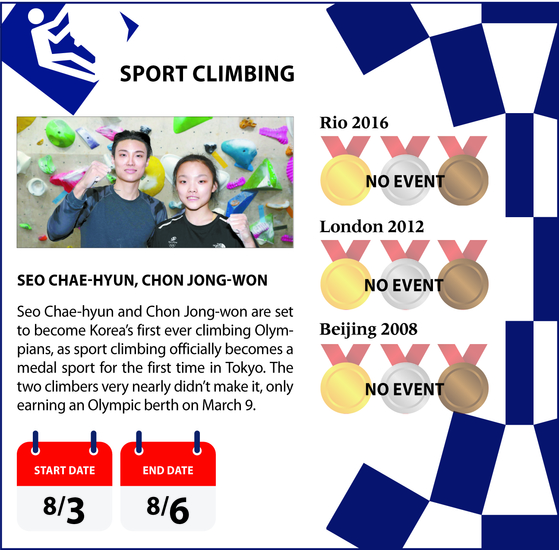 But luck alone doesn’t get one to the Olympics.

Unlike Chon, Seo is more confident with lead. Seventeen-year-old Seo debuted at the 2019 IFSC World Cup, where she demonstrated her strength in lead, winning four gold medals, one silver and one bronze medal in the six lead events. She went on to win gold medals in both lead and bouldering at the 2019 Asian Championships in Bogor, Java, Indonesia on Nov. 10, 2019.

Despite concerns that Seo may have to head to Tokyo without being vaccinated as people younger than 18 are not included in the government vaccination plan in Korea, Seo was able to get special permission to receive her first Pfizer jab on June 11 and completed her second shot on July 2.


The sport climbing event starts with the men’s qualifications on Aug. 3 and ends on Aug. 6 with the women’s finals.