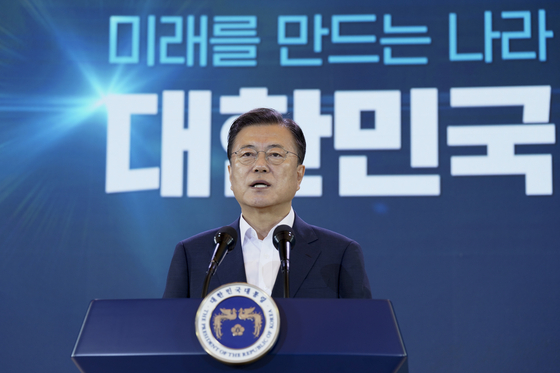 The Korean New Deal 2.0 was announced Wednesday by the Blue House on the first anniversary of the program's introduction last year. It also announced a Human New Deal that concentrates on talent, inequalities and the social safety net.

It said the new plans will create 600,000 more jobs, direct and indirectly, on top of 1.9 million promised a year ago.

Of the 220 trillion won in investment, the government will be responsible for 73 percent or 160 trillion won. That’s a 40 percent increase from the initial goal of 114.1 trillion won.

Next year alone, the government is planning to invest 30 trillion won. That’s 29.3 percent more than its initial goal of 23.2 trillion won.

The government is nearly doubling its investment in the Human New Deal from 4.3 trillion won to 9 trillion won.

In the upgraded version of the Human New Deal, the government vows more support for investing in human resources including expanding the number of software colleges from 41 to 64 by 2025 as well as opening a K-Digital Training center for start-ups.

The goal is to create 90,000 software developers and support other industries that hold promise for the future such as system semiconductors, biopharmaceuticals and advanced cars.

To narrow the opportunity gap between children in urban and rural areas, the government will accelerate access to digital technologies for kids living on farms and other remote areas.

Money will be spent on scholarships for children from poor families and multiracial families with low incomes.

The social safety net will be improved for children of single parents, old people and people with disabilities.

Under the Human New Deal, the government will create a new program that helps young people build wealth, afford housing and pay for school tuitions.

It will subsidize savings plans for young people with annual incomes of 22 million won or less.

The government has decided to invest in the development of so-called metaverse technologies that are getting a lot of attention in the technology industry.

This is an addition to the government's plans for the Digital New Deal, which focuses on digital businesses, networks and artificial intelligence.

According to the government, Korea will take a pioneering role in the era of hyper-connectivity by leading in metaverse and cloud technologies.

“While the threat of Covid-19 still exists and we face a critical moment at which the social distancing measures in the greater Seoul area have been raised to LKevel 4, we must continue forward with the Korean New Deal,” President Moon Jae-in said in a speech Wednesday.

“[The Korean New Deal] started off as a strategy to create a large number of jobs to fight the Covid-19 crisis,” Moon said. “While it kicked off with an emphasis on the Digital New Deal, we have made the Green New Deal the other main pillar in fighting climate change and speeding up the transition toward a low-carbon economy.

“But as we have included the expansion of employment and a social safety net as the foundation of the Korean New Deal, we have finally fulfilled its complete form.”

“We have turned the Covid-19 crisis into an opportunity,” the president said. “The [upgraded] Korean New Deal will be our  strongest policy tool.”