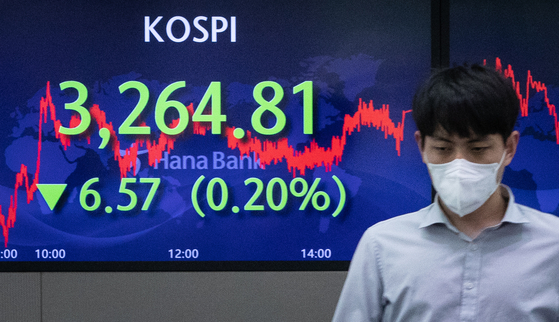 A screen in Hana Bank's trading room in central Seoul shows the Kospi closing at 3,264.81 points on Wednesday, down 6.57 points, or 0.2 percent, from the previous trading day. [NEWS1]


Stocks edged down Wednesday, snapping a two-day winning streak as U.S. losses amid renewed inflationary pressure took its toll on investor sentiment. The won fell against the dollar.

Stocks got off to a weak start as an estimate-beating 0.9 percent on-year increase in U.S. consumer prices in June fanned market worries that the U.S. Federal Reserve may hasten the time frame for tapering its asset-buying program.

Overnight, the Nasdaq Composite fell 0.38 percent, with the Dow Jones Industrial Average and the S&P 500 down 0.31 percent and 0.35 percent, respectively.

Amid record-breaking virus cases, the market's loss was limited on news that the country added jobs for four straight months in June.

The local currency closed at 1,148.5 won against the dollar, up 3.1 won from the previous session's close.