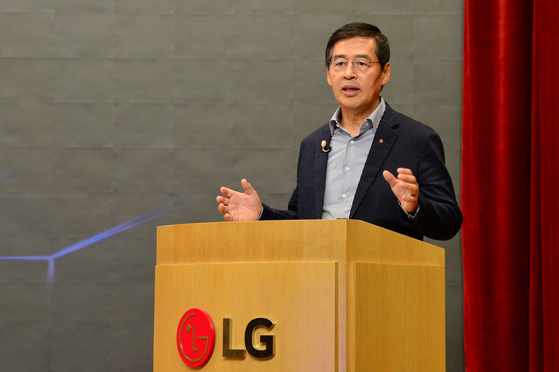 
LG Chem plans to invest 10 trillion won ($8.7 billion) over the next five years to ensure the sustainable growth of its battery parts, ecofriendly material and drug businesses.

LG Chem has been pushing for years to reduce its dependence on the petrochemical business. In recent years, its electric vehicle battery business has proven a success, now generating revenue on par with the older petrochemical unit.

“The standard of a company’s success today is sustainability and this principle has to underlie every decision-making process, whether it’s setting strategy or making investments,” said Shin. “This will be our core perspective in innovating our business portfolio.”

The 10 trillion won investment will run through 2025. Of that money, 6 trillion won, will go to battery parts and materials.

LG Chem’s wholly-owned subsidiary LG Energy Solution is already a local leader in EV batteries. The Wednesday announcement, however, stipulates plans to expand its role from just assembling the final product to also manufacturing the components that go inside it.

Among the four core components in an EV battery, LG Chem produces cathode materials from two plants in Korea and one in China. The goal is to expand its capacity from 40,000 tons last year to 260,000 tons a year by 2026. A new cathode material factory is slated to start construction in December.

LG Chem’s production of carbon nanotubes (CNT) is also planned to jump threefold by 2025 from the current 1,700 tons a year. In batteries, CNT is not a core component but an additive that can enhance battery performance. In Korea, LG is one of the material’s few local suppliers and the only battery maker to include it in its product, it says.

The company has two CNT factories at the moment and is planning to start constructing a third later this year.

For the first time, Shin shared plans to start producing separators, another core battery component, by establishing a joint venture or merging with external companies.

“There is no global company at the moment that has a profound understanding in batteries and has the production capacity to manufacture different materials,” he said. “Our focus is not just about cathodes. The goal is to become an all-rounder in battery components.”

Three trillion won of the investment will go toward developing ecofriendly materials.

Chemical companies in Korea today face competition not just among themselves, but also from oil refiners that are increasingly engaging in the chemical business. Shin said a way to maintain a competitive edge was producing high-value products that require more advanced technology and expertise.

Such products include bio materials like degradable plastic, recycling technology that could break down plastic to individual molecules and materials that could be used on ecofriendly energy sources like solar panels.

One trillion won will be dedicated to developing new drugs. The company is currently developing 45 pipelines, among which 11 are undergoing clinical trials.

In the bio pharmaceutical industry, developing a completely new drug is a difficult task with very low success rates. LG Chem has developed new drugs of its own but none of them were globally successful. Shin’s goal is to have at least two drugs generating profits overseas by 2030.

When reporters asked how the company will raise the 10 trillion won, Shin pointed to funding from LG Energy Solution, the battery business unit that spun off in December.

In early June, LG Energy Solution applied for preliminary approval to go public on the country's main stock market. If everything goes to plan, the company could be listed this year, the CEO said.

“Before the spinoff, the battery unit took up most of the investments made out from our operating profits,” he added. “Now that LG Energy Solution is set to raise big funds from the spin-off and IPO, it’s natural to say that it’s now the affiliate’s turn to invest.”

Shin also noted that LG Chem will remain the major shareholder with 70 to 80 percent of LG Energy Solution after the IPO, which will bring financial gains as the battery company grows.

Across all three businesses — battery parts, new materials and drugs — LG Chem is currently looking into more than 30 companies it could work with via strategic investment, joint ventures or mergers.

“We’re going through our most transitional phase yet in establishing a sustainable business model,” Shin added. “We’ll start seeing more noticeable changes from the year’s second half.”