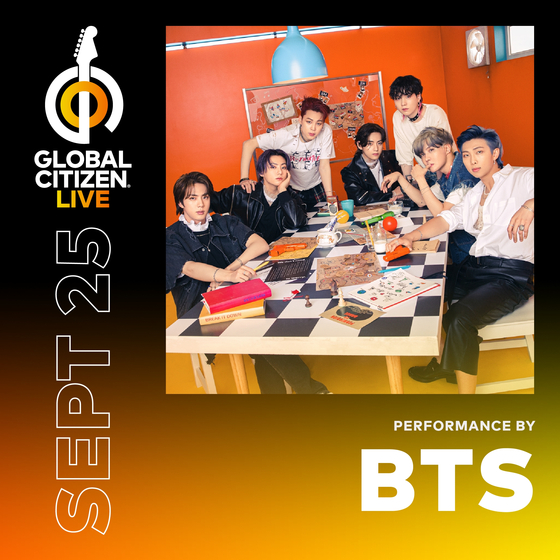 
BTS will be participating in Global Citizen Live for the first time.

Global Citizen Live is a 24-hour broadcast featuring performances and events from around the world. It will take place on Sept. 25 and be live streamed by ABC, ABC News Live, BBC, iHeartRadio, FX, Hulu, YouTube and Twitter.

According to Global Citizen, the event will be organized with a live audience in some parts of the world, including in Central Park, New York.

"BTS literally will inspire an entire region, and the world. They are not just one of the world's greatest K-pop acts, they are one of the world's greatest artists, period," Global Citizen CEO Hugh Evans said in a statement. "And I think their career has shown that they have such an incredibly epic reach that inspires people to participate. So the fact that they are going to be so involved in Global Citizen Live in such a big way is incredible."

Global Citizen Live will continue to speak about and raise funds for defeating poverty around the world, especially the effects of the coronavirus pandemic.

"We must rectify the damage done and hold world leaders and businesses accountable for ensuring that the entire world recovers from this pandemic together. 'Equitable recovery' is not an act of charity. It is the only way we can ensure a fighting chance at achieving a sustainable world free from
extreme poverty."