Pleats Mama creates its bags from thread that has been made from recycled plastic bottles. Moreover, mere centimeters of thread is left after making a bag, contrary to the tons of waste created by design brands. How does the brand do it? Wang Jong-mi, the founder and CEO of Pleats Mama, reveals the company's secrets.

"The number of plastic bottles that we have recycled comes to about two million so far," said Wang.

"I used to work as a designer at a sweater OEM company.  All I saw were threads that were left over after. It's a given fact that the fashion industry makes a lot of waste in the process of making clothes. I've been seeing that first-hand, and it made me wonder whether there was eco-friendly thread and since we were making bags out of knitted material, I was looking for thread that could meet my needs. I found that Hyosung had made thread called Regen 10 years ago using plastic bottles that people threw away, and decided to use it.

"People throw out their recyclable waste quite thoroughly in Korea. But when that garbage gets collected, everything gets mixed up and people's efforts are wasted. We need transparent water bottles to make long fibers but they are mixed with colored bottles and other waste, which made them impossible for us to use. The Korea plastic flakes weren't good enough to make long fibers so we had to import them all from Taiwan, Japan or the United States. We were buying polyester chips from abroad."

Under such circumstances, over 5,000 tons of plastic garbage was being imported in an ironic effort to protect the environment. In order to remedy this issue, CEO Wang teamed up with Hyosung T&C to make use of local waste and turn it into commercial goods. Through the project "Regen Jeju," they collected plastic bottles from Jeju Island and succeeded in creating a polyester fiber called Regen and making pleated bags from the thread.

"I told Hyosung that I'll take all responsibility if we fail, but they still said no for a while. Then they were persuaded and told me that we could work together. Samdasoo helped us come up with a collection system and that's how the project came about," said Wang. 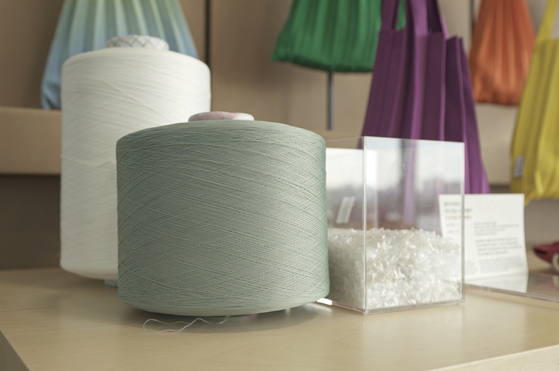 Pleats Mama has also implemented an environmentally-friendly element in its production process. The brand creates all its bags in a knitting method that's based on the zero-waste rule.

"We create our goods using a zero-waste knitting method. We make our sweaters by forming each and every one of them," she said.

The fashion industry creates a tremendous amount of waste and the amount of wasted material coming from 13,200 factories in Seoul accounts for approximately 91,250 tons a year. Even though most of it is reusable, it is mostly thrown away and incinerated or buried. Pleats Mama does not cut its products from ready-made fabric, but forms each and every one of its bags from scratch to ensure that the minimum amount of waste is made.

"I would say only 0.5 grams, one gram, less than a palm's amount of thread is left after making a bag. There is a limited amount of bags that can be made with one machine, I would say four to five an hour, so it does take a lot more time to just cut and shape and that time corresponds to the cost. It means that it costs a lot more for us to pursue this method. But the reason we're pushing for this zero-waste method is because I think the value of our brand lies in minimalizing the design, the production and everything else that comes with making an environmentally-friendly product. This is a value that we're going to keep into the future," said Wang.

ITZY's MAMA performance is most viewed from ceremony