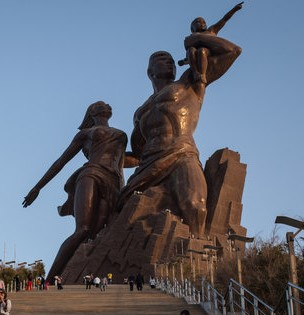 The African Renaissance Monument near Dakar, Senegal, was one of the sculptures built by Mansudae Overseas Projects before such commissions were forbidden by the United Nations Security Council in 2017. [JOONGANG PHOTO]

North Korea's Mansudae Art Studio is probably behind the construction of a monumental statue in the West African country of Benin, in violation of United Nations sanctions, according to a Voice of America (VOA) report Wednesday.

Previous reporting by the French-language arm of the Chinese state news agency Xinhua and Beninese media portal Beninplus.com said the 30-meter bronze statue under construction in Cotonou, Benin – entitled “Amazone” after an all-female military regiment of the kingdom of Dahomey, which existed within the modern territory of Benin – was designed by a Chinese sculptor.

However, documents obtained by VOA show that Korean-language design blueprints and contracts for the statue were drafted by a company called Chongryong International Development. Furthermore, the initials of designers, architects, and sculptors listed in the documents include “K.C.J.” and “R.Y.C.,” which are more likely to be Korean names than Chinese ones.

Chongryong is believed to be a front for the state-owned Mansudae Art Studio. Under United Nations sanctions passed in 2016 and 2017, Mansudae Art Studio and its affiliate companies are forbidden from exporting artwork or undertaking projects overseas.

The studio is controlled by the propaganda department of the Workers’ Party and is responsible for churning out artwork inside North Korea that maintains the cult of personality surrounding its leaders, including current leader Kim Jong-un, his father and grandfather.

North Korean artwork in Africa is not a new phenomenon. The regime conducted extensive diplomatic outreach to African countries in the Non-Aligned Movement during the 1970’s and 1980’s, efforts bolstered by ideological sympathy between the North and authoritarian states in Africa.

Mansudae also constructed a giant statue of Laurent Kabila, former president of the Democratic Republic of the Congo in Kinshasa and a memorial to Angolan independence fighter Agostinho Neto in Luanda.

Although the North initially built statues in Africa for free, the regime increasingly turned to earning money from African commissions as it faced a shortfall of foreign currency following the break-up of the Eastern Bloc in the early 1990’s.

The United Nations Security Council imposed sanctions on Mansudae Art Studio in 2016 and the studio’s foreign branch Mansudae Overseas Projects in 2017 after investigations revealed that the studio was selling artwork to raise money for the North Korean government.

However, inconsistent enforcement of the sanctions by African countries and close ties with the North have allowed projects such as the Amazone in Benin to proceed.