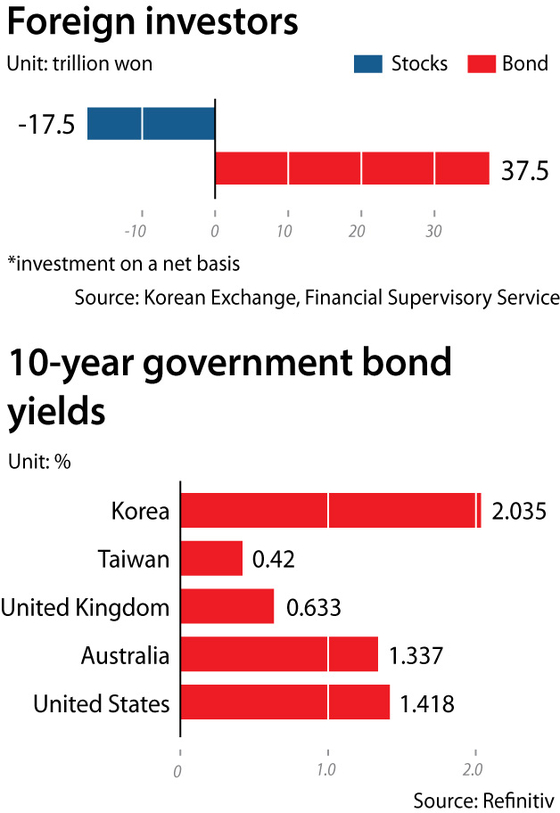 Foreigners are shifting from Korean stocks and scrambling to buy up won-denominated bonds due to their high yields.

According to Korea Exchange, foreign investors sold 17.5 trillion-won ($14.9 billion) of stocks Jan. 4 to June 30. During the same period, they net purchased 37.5 trillion won of bonds, buying 67.4-trillion-won worth and redeeming 29.9 trillion won. On a net basis, bond purchases were up 51.9 percent on year.

Foreigners owned a record 188 trillion-won of won bonds as of June, 8.7 percent of the total.

Although base rate increases — hinted by Bank of Korea Gov. Lee Ju-yeol last month — generally lowers the attractiveness of investing money in bonds, foreign investors have been moving differently.

“Korea’s government bonds are popular because they have a higher yield than other countries’,” said Gong Dong-rak, an analyst at Daeshin Securities.

Compared to other countries with a AA credit rating by Moody’s, Korean government bonds have a higher yield. The 10-year government bond had a 2.035 percent yield as of Tuesday, while Britain’s is paying 0.633 percent and Taiwan’s 0.42 percent. Both countries also have an AA rating.

Experts expect strong foreign buying to continue in the future.

“Korea has high investment attractiveness because its government bonds have high interest rates and is known as a country with a current account surplus, less likely for the currency to suddenly lose value,” said Kim Hak-kyun, head of a research center at Shinyoung Securities.

Having many mid- to long-term investors is another plus. According to Financial Supervisory Service, 67 percent of the foreign investments into government bonds were from overseas central banks and sovereign wealth funds as of April. Such groups put in hefty amounts of money, planning their investments for the long term, serving as a sign that money will remain in Korea and not flow out quickly.