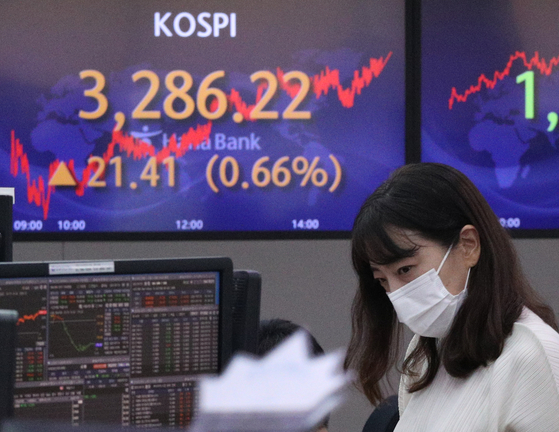 
Stocks rebounded Thursday morning as investors are relieved by the U.S. Federal Reserve's reiteration of its dovish stance, with China's economic indicators signaling that the global recovery is on track. The won rose against the dollar.

Stocks opened higher, taking a cue from Fed Chairman Jerome Powell's reassurance that the time is not ripe for an early tapering of accommodative policies.

The Bank of Korea held interest rates at a record low of 0.5 percent in a widely expected move amid spiking virus cases.

"China's real economy came out better than expected, which seems to have fueled optimism for the Korean economy as well," Mirae Asset analyst Seo Sang-young said.

The local currency closed at 1,141.5 won against the dollar, down 7 won from the previous session's close.