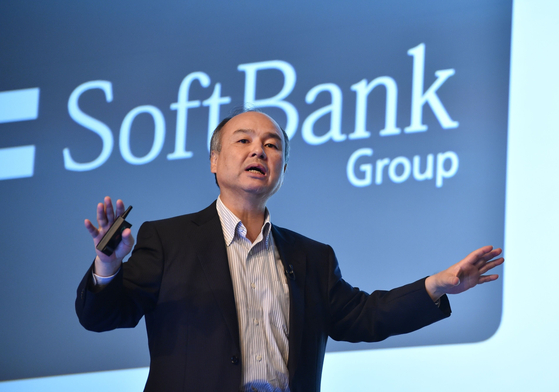 
SoftBank’s latest $1.7-billion bet on accommodation reservation start-up Yanolja underscores the investment company’s growing appetite for Korea-based start-ups, or start-ups run by a Korean, as more high-tech firms manage to scale up their business during the pandemic.

Until this year, Coupang was the only Korean company backed by Vision Fund, a gargantuan investment vehicle run by SoftBank CEO Masayoshi Son.

But that number has jumped to four including Yanolja this year, a testament to the increasing presence of Korean players in the Vision Fund portfolio.

Besides Yanolja, SoftBank has written big checks worth over $400 million combined through the fund, pumping money into Sendbird, Iyuno-SDI Group and Riiid.

Sendbird is a San Mateo, California-based developer of a messaging application programing interface, run by founder and CEO Kim Dong-shin.

Founded in 2002, Iyuno-SDI Group is a Seoul-based start-up specializing in the localization of media services, while Seoul-based Riiid focuses on education programs built upon artificial intelligence.

Coupang secured two rounds of investment — $1 billion initially and then a further $2 billion — from the Vision Fund 1, while the other start-ups gained funding from Vision Fund 2, that has a $40 billion financial allocation.

Landing an investment from the fund is considered a privilege in the start-up landscape, as the funding instrument is known for primarily targeting developed start-ups with a track record of scalable business models.

The increased investment came as Korea sees more high-tech firms with a solid user base and high corporate valuation.

“Several years ago, Coupang might be one of the few start-ups operating in Korea valued over $1 billion, which means there are not many candidates that fit Vision Fund’s criteria,” said Lee Ki-dae, director at Startup Alliance, a non-profit support center for start-ups.


“But now we’ve seen more tech start-ups with sizable business records and success cases where those start-ups took off outside of Korea."

Lee also noted the potential role of Greg Moon, managing partner at SoftBank Investment Advisors, who is widely viewed as a close aide of Son.

“Moon headed SoftBank Ventures Asia, which is headquartered in Seoul, in the late 2000s through 2018 and then moved to Vision Fund’s Asia unit to make investment decisions across the Asia-Pacific region,” he said.

“With his stint at the Seoul-based office of SoftBank Ventures, he would have a deep understanding of the Korean start-up ecosystem and firms, which could act as a major factor in the investment decision."

Some Korean media outlets cited the heightened regulatory risks tied with Chinese start-ups as the reason for bolstering the standing of Korean start-ups.

The Chinese government launched a probe into Didi Chuxing, a Beijing-based ride-hailing platform operator, after it debuted on the New York Stock Exchange last month.

SoftBank is the single largest investor of Didi, with $500 million injected from the Vision Fund in May.

On the other hands, Coupang sails through with its initial public offering in New York in March, allowing SoftBank to achieve a record profit this year following significant losses incurred by struggling investees like WeWork.