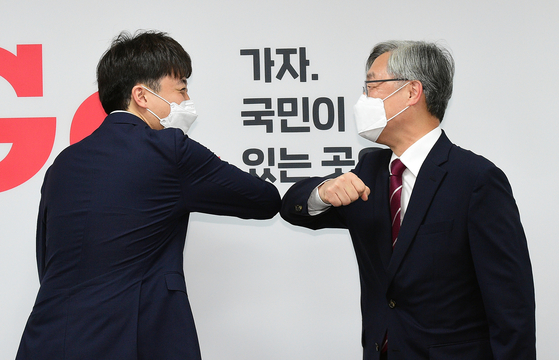 Choe Jae-hyeong, right, former head of the Board of Audit and Inspection, and Lee Jun-seok, chair of the People Power Party, bump elbows at a PPP welcome ceremony on Thursday at its headquarters in Yeouido, western Seoul. [LIM HYUN-DONG]


Choe Jae-hyeong, the former chairman of the Board of Audit and Inspection (BAI), joined the main opposition People Power Party (PPP) Thursday, another step in his bid to compete in next year’s presidential election.

After conveying his intentions to join the party to Lee Jun-seok, chair of the PPP, earlier Thursday, Choe officially joined the party through a mobile registration process completed at a welcome ceremony held at the party’s headquarters in Yeouido, western Seoul.

On June 28, Choe tendered his resignation as head of the BAI, signaling his intent to run as a conservative contender in the March 9 presidential election.

Advocating a change in administration, Choe told reporters afterwards, “I think that it is most important to create a country where youths, who cannot see a future, can live with hope.”

Choe said, “Since I have decided to start politics, I determined that it was the right idea to join a party and be an instigator of change in politics, rather than looking at it from a critical perspective from outside."

He said that the “center of achieving an administration change” had to be through the main opposition PPP.

Choe addressed qualms some people have about the main opposition party.

“Since Chairman Lee took his post, he has been making a lot of effort for new changes," he said, "and I have seen that such efforts are well-received by the public. I will add even a tad bit to the changes and repay the people by practicing good politics."

Choe said he has not considered what position he will hold within the party, but “will just play a role as an ordinary member."

Expressing his gratitude to Choe, Lee said, “We will do our best to help you wherever we can.”

Lee continued, “I will also watch and support party member Choe who has declared that he will play a role in the process of raising alarm on the Moon Jae-in government and bringing about an administration change.”

When asked about the political values he would pursue, Choe replied, "new change and coexistence,” saying a divided country adds to the suffering of the people and is most damaging to those in need of help.

Choe, a former judge, was appointed by President Moon Jae-in in January 2018 to head the audit agency, known for its political independence and neutrality. He had six months left in his four-year tenure when he tendered his resignation on June 28.

He declared his intention to enter politics on July 8.

Choe was the second top official from the Moon Jae-in administration to resign for a possible presidential run after Yoon Seok-youl stepped down as prosecutor general in March.

Choe has been named as a strong conservative presidential candidate alongside the current front-runner Yoon, whose popularity has slid slightly after his mother-in-law was found guilty of fraud and medical law violations earlier this month. His wife also faces bribery allegations.

A BAI chairman has never stepped down before his term was over to run for office, though former prime ministers Lee Hoi-chang and Kim Hwang-sik, who also served as state audit agency heads, entered politics after their prime ministerial stints.

Members of the ruling Democratic Party (DP) slammed Choe, saying it was a poor precedent for the former chief of the state audit agency to go into politics.

Song Young-gil, chairman of the DP, criticized Choe joining the PPP as setting “a very bad example for our constitutional history."

Song told reporters while visiting South Chungcheong, “If the head of the BAI chairman or prosecutor general do not hold the posture of volunteering their services through their last public office and run as presidential candidates, all of their actions can be considered political acts and be suspected as pre-election campaigns.”

Former Prime Minister Chung Sye-kyun, a DP presidential contender, tweeted Thursday that Choe’s move was a “betrayal of the people, betrayal of god and betrayal of principle,” adding “betrayers are bound to fail.”

In the latest poll by Realmeter on most favored presidential hopefuls released Thursday, Choe came in fifth with 4.2 percent support.

Yoon Seok-youl was in the lead with 27.8 percent, though his popularity dropped below the 30 percent mark for the first time in four months. He was trailed by liberal Gyeonggi Gov. Lee Jae-myung at 26.4 percent, whose popularity has been on a steady rise. They were followed by former DP head Lee Nak-yon at 15.6 percent and former Justice Minister Choo Mi-ae of the DP at 5.2 percent in the poll conducted on 2,036 voters nationwide over Monday and Tuesday.

Yoon on Thursday met with former UN Secretary General Ban Ki-moon and told reporters that he “respects the choice of each politician” on Choe’s joining of the PPP.