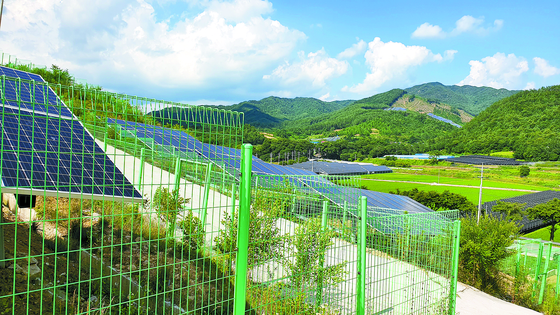 
On July 3, the villagers of Daerang-dong, Jecheon, North Chungcheong, gathered to hold yet another round of discussions on what to do about the controversial solar power generator on a hillside near their village.

A road was damaged from all the heavy equipment moved up the hillside. The debate was whether it should be repaired with cement or asphalt - and who would pay. The meeting ended inconclusively.

"No matter what they decide, even if they say they will do the work," sighs a spokesman for a company that builds small solar panel power plants in the area, "the friction will continue to occur."

The conflict is a small one - but emblematic of a low-running battle between operators of small solar power plants throughout Korea and the communities they have been plunked in the middle of.

Korea's mountainous villages are now home to some 12,000 such solar power plants.

And often relations in those homes are testy.

Investors built solar panel power plants on mountain, encouraged by the central government as a way to wean Korea off nuclear power, and sell electricity generated by the plants to the Korea Electric Power Corporation (KEPCO).

While the investors have been making money from the solar power plants, local residents have benefited little. Their complaints have been growing. Some are picayune, like sunlight reflected by the panels.

Some are more substantial. In Jangsu County, North Jeolla, last August, panels on a mountaintop collapsed after heavy rainfall and caused a landslide.

"In what way is cutting down healthy trees and building a power plant eco-friendly?" one villager who has been protesting the plants in Jecheon, North Chungcheong, told the JoongAng Ilbo.

"The government encouraged us to build these plants, and we gave the village a development fund," said a power plant owner in Jecheon. "But nothing comes easy."

Disagreement on both sides

Kim Seok-ju, 65, suffered an accident in a landslide in August 2020 in Gunwi County, North Gyeongsang. He thinks it was caused by a solar power plant being built in the area at a time of heavy rainfall.

"I was working in the field, when I heard a rumble from the power plant," he said, recalling the accident.

"I called to my wife who was in the house and we escaped. The fields were ruined, and the dogs and puppies that we were raising were buried – they all died. Since the accident, I have become petrified with fear and my body shakes whenever it rains.

"As long as there are solar plants in the area, I don't think my wife and I will be able to continue to live in peace," he added.

"Kim is playing the victim so he can obtain some compensation from our solar plant business, and he and other residents in the area have tried to obstruct our work for years," said a spokesperson for a power plant builder in the area.

"They've been torturing us to the point that sometimes I wish I would just die at the construction site."

Conflicts over solar power stations can be found in mountainous villages in Gyeongsang, Jeolla, and Chungcheong regions.

In May, the Joongang Ilbo visited a small village in Sobomyeon, Gunwi Country, North Gyeongsang. The village was located on a hill and as we approached it, solar panels began to come into view. 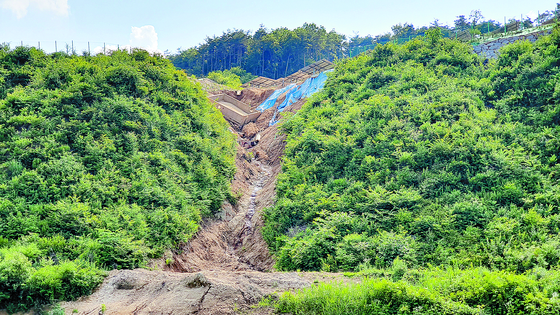 The site where the solar panel power plant collapsed last year, has not been repaired, though rainy season has begun in Korea. [KANG JOO-AN]

The panels fill gaps between wooded areas of the village - gaps that didn't exist until the solar stations were constructed.

Ryu Ho-sik, 55, a resident of Daegu who moved to the village five years ago to help his son recuperate from an illness, says the solar power plants have been a constant pain.

Almost immediately after he moved in, a couple of solar panels were installed right next to his place.

"The workers would cut down trees, and there was constant noise and dust," said Ryu. "My son, who needs to wear an oxygen mask on a daily basis, faced serious problems.

"Over the last few years, the entire area around our house has been filled with solar panels, so the whole intention of moving in search of a better environment has lost its purpose," he said.

Too much speed not much planning

Solar power plays an important role in slowing down global warming. There is plenty of research on the use of sunlight as an alternative to fossil fuels.

"It is trees that convert sunlight into energy," said Jang Taek-hee, a researcher on the environment and renewable energy. "If solar energy technology continues to develop, a day may come when it can produce energy more efficiently than trees."

Tony Seba, author of the Amazon best-seller "Clean disruption of Energy and Transportation," has emphasized in his research and lectures that solar energy's cost-competitiveness is on the rise because of rapid advancements in the technology.

But its application has been more fast and loose in Korea than perhaps elsewhere.

Forests were cut down and large power plants built without much planning, according to data submitted by the Ministry of Trade, Industry and Energy and the Korea Forest Service to Rep. Yoon Young-seok of the People Power Party.

According to the data, the number of solar power plants in mountainous areas in Korea exceeded 12,000 at the end of last year.

Using the report, Rep. Yoon had criticized the Moon Jae-in administration for causing deforestation in the name of solar energy.

The Ministry of Trade, Industry and Energy says otherwise.

"Compared to the last administration, the development of solar power plants has been slow," an official of the Ministry of Trade, Industry and Energy told the JoongAng Ilbo.

Some experts have criticized policies that have encouraged deforestation in the name of solar energy development.

After 2018, laws allowed owners of land in a mountainous area to change the use of the land from wilderness to multiple-purpose use once solar plants were built in vicinity, which gave the owner more diverse options in the types of buildings that could be built on the land to try to hike up its price.

"A lot of the solar power plant developers would select some of the hard-to-reach mountainous areas where electricity transmission is weak," said a local government official of a district office in North Gyeongsang. "It can be suspected that some of these developers were looking for real estate profits more than anything else."

Another problem with solar power plants being built in  mountainous regions is that they can lead to landslides after heavy rains.

A collapsed solar power plant last year in Jangsu, North Jeolla has not yet been fully restored.

When the Joongang Ilbo visited the location on July 2, the reporter could see large solar power plants visible on both sides of the road leading to the village.

"Most of the people in the neighborhood hate the solar power plants," one resident of the village told the Joongang Ilbo. "The region is famous for its natural scenery so it does not make any sense to cut down trees in the mountains to replace them with ecofriendly power.

"Residents have protested, but the authorities gave permission, so there was no way to prevent it," he added. "At one point in time, all the customers in the neighborhood restaurants were solar power construction workers."

When the reporter visited the location where the accident happened, a large solar power plant was visible though forest. The iron fence had a warning sign reading, "Extra high voltage."

One solar power professional that the JoongAng Ilbo spoke with admitted having questioned the solar panel policies.
"When it rains, a mountainous area that has been deforested has a high risk of landslides," he said.

Some residents who have been fighting solar power plants say the most difficult part of the fight is not being heard.

"It's shocking to see the extent to which the government will go to ignore our pleas," said a resident of a village in North Chungcheong where a solar power plant is being developed. "We used to lead such happy, simple lives before all this."

"People who have done nothing but farm their entire lives are now embroiled in lawsuits," said a farmer from the Gyeongsang region.

"Many people do not realize the hardship that residents without money face fighting in court with power plant companies and paying large attorney fees," he said.