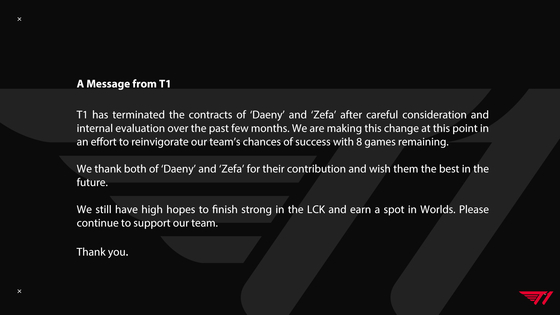 The team's official statement read that the decision was made "after careful consideration and internal evaluation over the past few months," and that the change was made "in an effort to reinvigorate our team's chances of success with eight games remaining."

The duo of Daeny and Zefa joined T1 last November, shortly after they won the 2020 World Championship with Damwon Gaming, then with Zefa in the head coach role. A mutually agreed role swap was made when they both moved to T1.


Daeny soon proved to be a somewhat divisive head coach, with his outspoken, bombastic personality, frank-to-a-fault interviews and willingness to bench star players whenever deemed necessary. His past seven months with T1 were not without controversy, as everyone had strong opinions on whether his continued liberal adjustments to the starting lineup during the spring split were a good idea or not.

Many T1 fans, at different times over the year, professed to being unsatisfied with Daeny's style of management. However, very few of them expected, or were happy to hear, that the team had fired their head coach and coach at such a crucial juncture in the season.

GM Choi "Polt" Seong-hun held a remote press conference from T1 headquarters at 1 p.m. and fielded questions from media about the decision.

Polt was careful not to divulge too much information in his answers, and spent most of the 50-minute meeting skillfully evading sharper inquiries. Still, he did share some details of how the bombshell decision was made.

"We believed directly asking the squad for their opinions on this matter would be a negative influence," Polt said, confirming that the players had no direct input on whether the team would fare better by letting Daeny and Zefa go at this point in time.

"The decision was made by the club. As general manager, I am responsible for many decisions, but this one was made following discussions involving my bosses," he said, confirming that upper management was involved in the coaches' abrupt termination, although he clarified that his own input was not insignificant either.

"I can't say 'yes' to whether this was the optimal timing to let them go, but I believed it was better to make the decision sooner rather than later."

When pressed for who exactly he meant by bosses or upper management, Polt only specified CEO Joe Marsh, although there may have been other additional actors Polt either chose not to mention or was not aware of.

As for the precise timeline of the dismissal, Polt said that while the idea had been internally discussed for a while, the decision to cut Daeny and Zefa had been finalized only "early this week" and was communicated to the players this Tuesday. He said that the coaches and the players were all understandably surprised when the news broke.

This is not the first time T1 has unceremoniously parted ways with their LCK team's coaching staff. Last September, head coach Kim Jung-su, who previously coached China's Invictus Gaming to the 2018 League of Legends World Championship title and joined T1 in 2020 on a three-year contract, left the organization under mutual agreement.