Korea's lone rider hopes to piaffe his way to a medal

Korea's lone rider hopes to piaffe his way to a medal 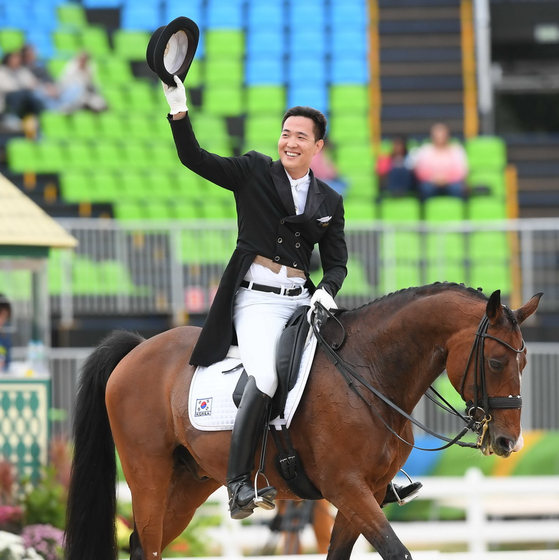 
A lone rider will represent Korea in the equestrian events at the 2020 Tokyo Games.

Equestrian has three disciplines, jumping, eventing and dressage, with individual and team medals awarded in each discipline. Kim Dong-seon, Korea's lone horse rider, will compete in the individual dressage event.

Dressage is the most expressive and artistic form of equestrian, as the horse and rider go through a sequence of movements in a 60-meter-by-20-meter arena. Riders must have a close connection with their horses as they need the utmost control to make them move from side to side, change from a gallop to a strut and change directions as they go by using subtle commands.

Jumping, also called show jumping, is arguably the best known of the three disciplines featuring different courses with 12 to 15 obstacles like walls, rails, bars and water. Penalties are incurred for each obstacle that is knocked down or the horse balks at. Riders try to complete the course in a set time, as exceeding the time limit incurs penalties, with as few faults as possible.

Eventing, also called equestrian triathlon, is a combination of three tests: Jumping, dressage and cross country. It is the most complete discipline as the sport originated as a cavalry test.

Cross country, which is unique to eventing, is the show-stopper, as the rider and horse jump over around 40 solid obstacles like logs, woodpiles and stone walls with water and ditches on an undulating six-kilometer course at speed. Riders must choose their routes wisely as shorter routes pose more challenges and have a higher risk of failure. 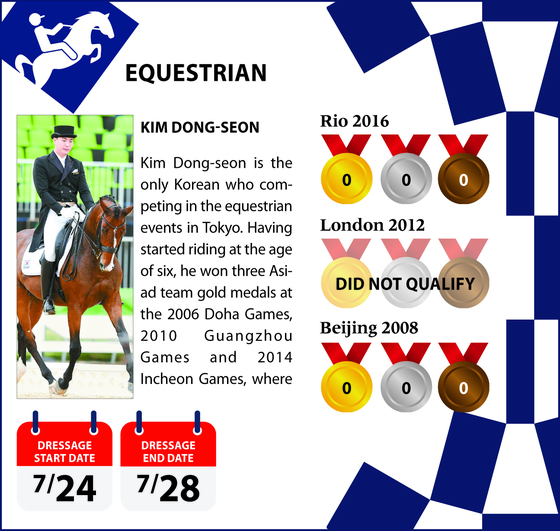 The Tokyo Olympics will be Kim's second time on the big stage. Kim was at the 2016 Rio Games dressage event with his horse Bukowski and came 17th in the preliminary round, finishing 43rd overall.

Kim started riding when he was six years old and won three Asiad team gold medals at the 2006 Doha Games, 2010 Guangzhou Games and at the 2014 Incheon Games, where he also won an individual silver medal.

Despite his successful career as a dressage rider, Kim, who is the son of Hanwha Group chairman and CEO Kim Seung-yeon, has had some problems away from the sport, and has been convicted several times for assault.

After Kim was sentenced to eight months in prison in January 2017, he was suspended from the national team for two years during his probation period. If the Tokyo Games had gone ahead on time, Kim would not have been allowed to compete.

But his probation ended this January, allowing Kim to qualify for the Olympics.

Kim secured his Olympic berth in February at the 2021 Adequan Global Dressage Festival held in Wellington, Florida, where he fulfilled the minimum eligibility requirement for the Olympics.

Korea started competing in equestrian events at the 1964 Tokyo Games and has participated in four more Olympics since, but is yet to win a medal.

The best Team Korea has done so far in dressage is Seo Jung-kyun finishing 10th and the national dressage team finishing seventh at the team dressage event, both during the 1988 Seoul Games.

At Tokyo, Kim will become the first-ever Korean to compete in two consecutive Olympics.

Equestrian events start with the first round of dressage qualifiers on July 24 and end on Aug. 7.