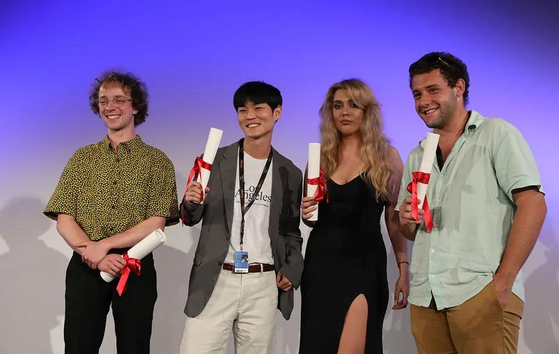 
Director Yoon Dae-woen’s short film “Cicada” (2021) was awarded the second prize at this year’s Cinéfondation, which is a section of the Cannes Film Festival for young next-generation filmmakers.

The renowned film festival made the announcement on July 15, local time.

“Cicada” was also selected as the opening film of this year’s Cinéfondation, which began jointly with the 74th Cannes Film Festival on July 6.

Yoon, 30, is graduating from the Korea National University of Arts’ School of Film, TV & Multimedia this year. His film competed with 17 other short films by young directors around the world. The 17-minute-long “Cicada” is his graduation work.

The first prize went to Belgian director Théo Degen for his short film, “The Salamander Child,” while the third prize was jointly awarded to Romanian director Carina-Gabriela Dasoveanu for “Love Stories on the Move” and Brazilian director Rodrigo Ribeyro for “Cantareira.”

“Cicada” tells the story of a transgender sex worker who works on Sowol-gil on Mount Namsan. The film follows one strange night in the protagonist's life and likens the experience to that of a cicada ripping out of its shell to fully become an adult.