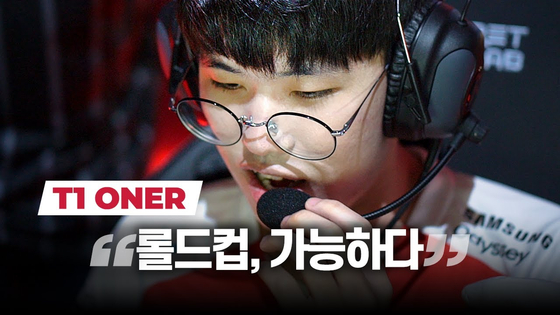 T1's Moon ″Oner″ Hyeon-joon played at LoL Park for the first time on Thursday, albeit without a live audience. [KORIZON ESPORTS]


After T1's 2-0 victory over KT Rolster on Thursday, rookie jungler Moon "Oner" Hyeon-joon sat down for a post-match chat to discuss playing at LoL Park for the first time, how he reacted to Yang "Daeny" Dae-in and Lee "Zefa" Jae-min's abrupt departure, and his goals for the rest of the season.


Q. You just played your match at LoL Park and won against KT in a 2-0. It must be a great day for you. How are you, Oner?

A. I felt like I performed poorly back when I played in spring. So I thought to myself that I should prepare really hard and put on a better performance this time. And I feel like I achieved that. I'm happy.


Q. The T1 players looked like they were in a good mood. But how were you feeling as you entered the stage today, as you were setting up for the match?

A. I hadn't been nervous even when we arrived at LoL Park. But then when we were setting up, getting ready for the match, my heart started beating faster. I started grabbing people around me and told them, "Hey, my heart is beating too fast." Then we started joking around, and I felt better.


Q. This may be a sensitive topic, but are you confident about keeping your starting spot?

A. Well, every single jungler on this T1 roster is just so good. To be honest, that makes me a little nervous, even though I do have confidence. But there will always be a player that's better for a certain meta, right? So, for now, I am confident about starting.


Q. T1 made a very sudden change to its coaching staff before today's match. May I carefully ask if it affected you? How did you feel about it?

A. I didn't have a lot of time to prepare for today's match. And in the middle of that, Daeny and Zefa ended up leaving. I felt very worried, to be honest. But there were so many things I had learned from them, and I think I did a good job of applying their feedback to my play. So I thought that I should keep working hard based on that.


Q. What kind of expectations should we have for T1 for the remainder of the summer split?