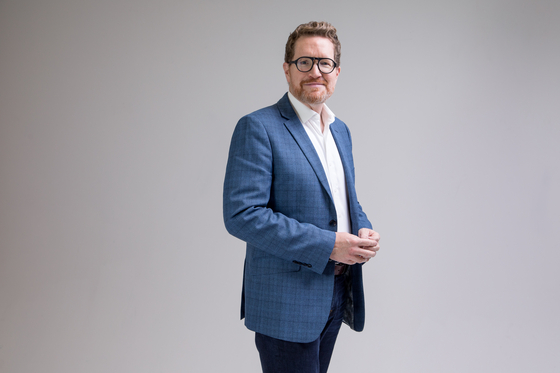 
Hana Financial Group is building a new headquarters and it's going to be big, beautiful and full of symbolism.

The structure planned for the Cheongna district of Incheon, will not scream wealth or exclusivity or stability, as a financial group might have chosen in the past. Its park-like spaces, open terraces and pathways that traverse the building from top to bottom will symbolize openness, transparency, health and wellbeing -- for people working inside as well as the surrounding community, according to NBBJ, a global architect and design firm in charge of the project.

The building is expected to be completed by 2024 and ready for occupancy by 2025.

The U.S.-based NBBJ was behind a number of workplace designs for big tech giants including Google, Amazon, and Tencent's headquarters in Shenzhen, dubbed Tencent Seafront Towers, Samsung Electronics' R&D Center in Suwon, Gyeonggi, as well as Samsung America's headquarters in San Jose, California.

Hana Financial's is one of the first workplace environments designed by NBBJ since the onset of the coronavirus pandemic. Unsurprisingly, the physical and mental health of workers and the community has become a key priority in the project. 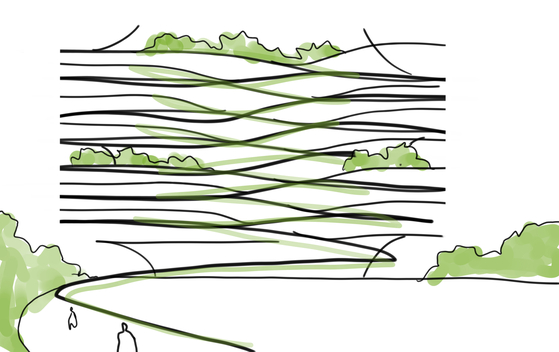 An early conceptual sketch of Hana Financial Group's headquarters to be built in Cheongna, Incheon, by 2024 [NBBJ]


"The pandemic didn't really create new trends in workplaces but it really accelerated several that were already in motion," said Robert Mankin, partner in charge of workplace design at NBBJ, in an interview with the Korea JoongAng Daily on July 6 via Zoom. "One issue it has obviously accelerated is health in the workplace, meaning the physical and mental wellbeing of individual employees but also of the team or the larger organization."

"We believe that through workspace design, employees can leave the office feeling better than when they arrive, that the office isn't just a place to work, it's actually a place in which you can be restored," he said.

Hana Financial is taking a big step in moving its headquarters from the center of Seoul to Incheon. Mankin said one of the big challenges in designing the building was how to attract talent.

"Hana wanted this to be a destination not just for talent from Korea but also, as they grow internationally, for potential international workers," Mankin said. "I think in some ways, we are creating a community out there [in Cheongna.]" 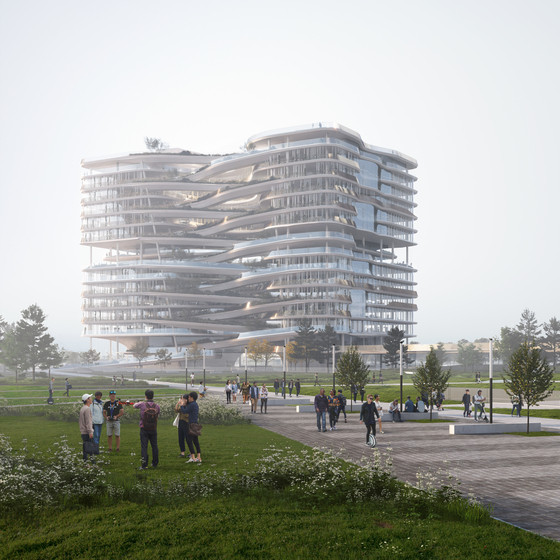 A computer-generated image of the Hana Financial Group headquarters to be built in Cheongna, Incheon, by 2024 [NBBJ]

The following are edited excerpts from the interview with Mankin.

Q. You mentioned some trends in workplace design that accelerated due to the pandemic. What are those apart from prioritizing the health and wellbeing of workers?

The other aspect about workplaces that the pandemic really accelerated is the idea of agency: the ability of employees to work where they want, and how they want throughout the day. Hana Financial headquarters is designed to allow employees a choice of where they work. They have a choice of how to get to their offices.

One other thing is the idea of mentorship. The one thing we have seen particularly here in North America where we've been working remotely is that [remote work has] had a particularly strong and negative impact on the younger generation, especially those just entering the workplace.


When they come into the workplace, they seek a really strong connection to the values of an organization. They see that as important as financial rewards. [But] their ability to connect with leadership has been constrained during the pandemic.

So the idea of being able to connect with leadership and to be mentored by leadership was a concept that we brought into this project. That's why we are creating community stations.

Q. You emphasize the building's connection with the community. How is that reflected in the design?

If you look at Hana Financial's vision, their measure of success is very much oriented towards customer and employee happiness and customer success. So investment in the community was something that we found very unique and powerful.

How that translated into the building was to create a very high level of transparency. Often we design headquarters for companies that are very closed off and very secure. And we've done many projects in Korea where they've been like that. 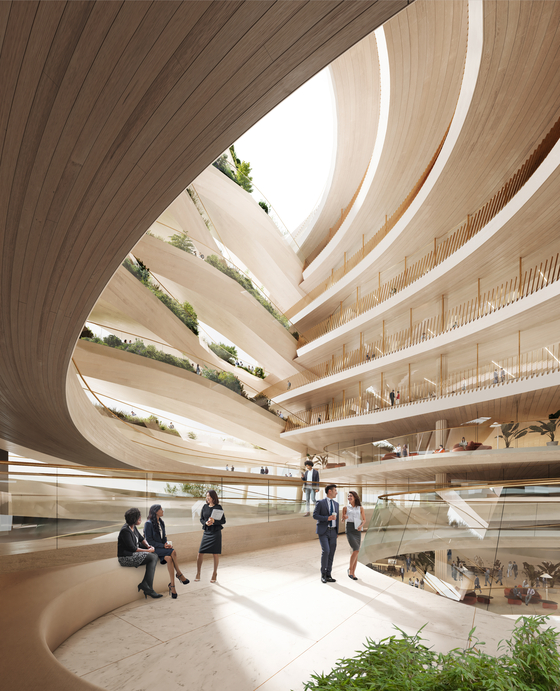 A computer-generated image of the interior atrium of the Hana Financial Group headquarters to be built in Cheongna, Incheon, by 2024 [NBBJ]


But this building is intended to be very open to the community. It has a very broad open lobby. It has ramps that run up through the building.


I think because there wasn't a large [center] of culture in the area, in a way what this headquarters is trying to do is to [become] the new center of this community in Cheongna.


Q. Carbon emissions and environmentally-friendly designs are big issues these days. Are there any features of this building that align with the global goal of carbon neutrality?

We wanted to both promote energy reduction and reduction in carbon, but also, again, support a healthier environment for the employees.

To reduce energy, the headquarters will utilize excess heat created from its nearby data center. We are also going to use other things like renewable energy. We are utilizing solar panels on the roof.

Q. Are there any special technological features like artificial intelligence or blockchain technology in the building?

That's still being discussed. One thing we are doing, again this is currently something in design, but we are looking at the experiential design on the west-facing ramps. It's going to be a digital projection experience -- something that responds visually to people as they move.

We haven't designed specifically what the different types of visual projections might be, but it would be something reactive to people moving through the building and it would also have the option of being customized for major holidays or major events in the company.

Q. It seems you have put a lot of work into the building's night view as well through lighting and media projections. Why is it important for a workplace to have a great night view?

It was very important for Hana Financial to create a destination for people. Leading them out of central Seoul to Cheongna but also to be a destination for people that come from the airport. The Hana site is very close to the expressway from Incheon Airport. So the aspiration is that this building goes beyond being a visual landmark, but also combines a unique experience that connects employees, visitors and the Cheongna community. 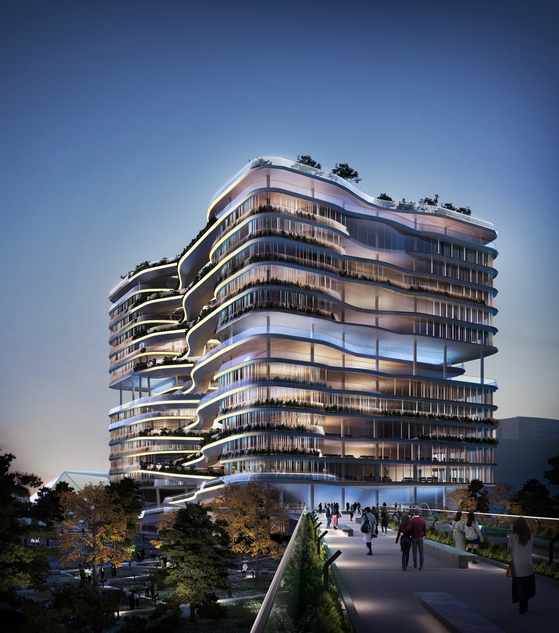 A computer-generated night view of the Hana Financial Group headquarters to be built in Cheongna, Incheon, by 2024 [NBBJ]


So it's important that the building is not just occupied during the day and unoccupied at night.

[According to NBBJ, various social activities and night time experiences will be offered at the building's apex, including a transparent glass observation deck.]

Q. NBBJ has been referring to brain science for its building designs. Were some of the colors and materials chosen for this project based on studies of the brain?

Dr. John Medina, a professor at the [University of Washington] in neurobiology has been an NBBJ fellow for several years. Through working with him I discovered that the scale of space and also color, natural light and nature all have an impact on people's wellbeing, cognitive thinking, creativity and their ability to really communicate and have ideas. 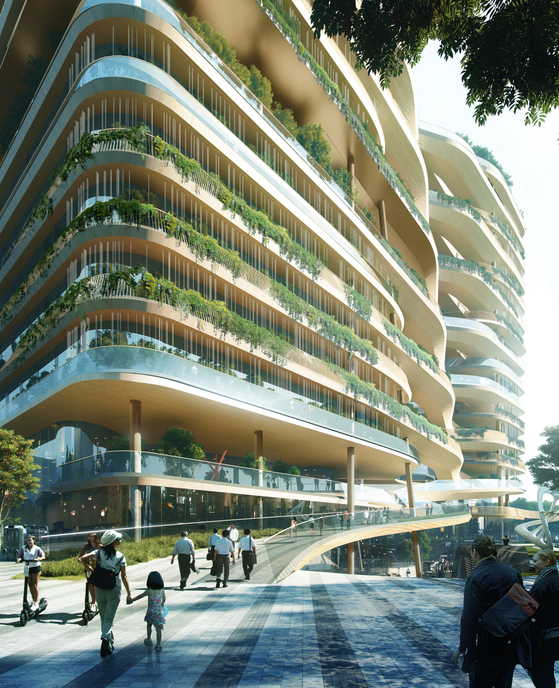 
You'll notice in the rendering there is a lot of wood. And that's different. Usually financial institutions are very grand, they use stone, because they are permanent, right? It should be permanent. That can be very cold and unwelcoming.

And so, the idea of the building was that it is welcoming to employees and to visitors. The use of lighter wood in the lobby and around the elevators and throughout the office was very intentional. We are also using lighter colors throughout. And also the wood is often rounded and carved. The intention is to look softer, more open and more welcoming.

Q. Are there specific characteristics of Korean clients that differ with clients elsewhere like in the United States?

I think the one interesting thing about the pandemic is [...] in the United States, many companies, including ourselves, went to remote work. But in Korea and in much of Asia there wasn't that much remote work. Most people still came into the office.

In the United States right now, everyone is figuring out how to bring employees back to the office, but that is not so much the issue in Korea.

I think it's actually more of how do you create a healthy work environment so that you can defend against a future pandemic and what are some of the strategies you can use if a pandemic does occur to allow the office to continue functioning. In some ways, some of that thinking in Asia is a little bit further along than it is in the U.S.

Often our clients in Asia have employees that work long hours. They are in the office 10 to 12 hours a day, so how do you keep them there? How can you make the office interesting? In the past, there would be amenities like food. 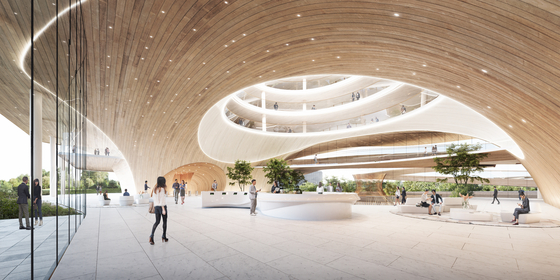 
Since people have had work from home, providing some of the conveniences people can get at home is another way of having people want to stay at work for a longer period of time.

So conveniences like medical clinic, different ways of exercising, it might be different services like salons and restaurants. These are different types of amenities that goes beyond what you might typically find in an office.

We are starting to see that a larger variety of amenities are coming into the workplace as a way of encouraging people to want to stay in the office and come back to the office. It is interesting how the convenience of working from home is now influencing the amenities that we are seeing in the office.

Q. With work from home becoming more prevalent, will there still be big distinctions in home designs and workplace designs?

That's an interesting topic. Actually the discussion point here in the U.S. is about where does workplace design stop? It doesn't necessarily stop at the building now, it actually stops in people's home offices.

I think they are still two very different sectors at a basic level. But there are aspects where [home design] does start to have similarities to the office. Including myself, I've been working from home for 15 to 16 months now.

I think a big difference for people in the workplace, especially the younger generation, is the office culture -- their ability to socially interact with people. Working over video or Zoom, working from home, you don't have that same ability.

So I think that's where the office is going to evolve. It's going to be less about having a desk. Now, frankly, you can do that just as easily from home and probably even concentrate better from home.

The office is going to be the place where people come together and interact with their networks. So I think the office isn't going to go away. It's going to evolve.


Q. Do you have plans to visit Korea?

I have visited Korea many times. I've been working in Korea for almost 20 years and usually I come from five to eight times a year. But obviously since the pandemic I haven't come. I have some clients that are getting eager to see us again so maybe later this summer I'll come.