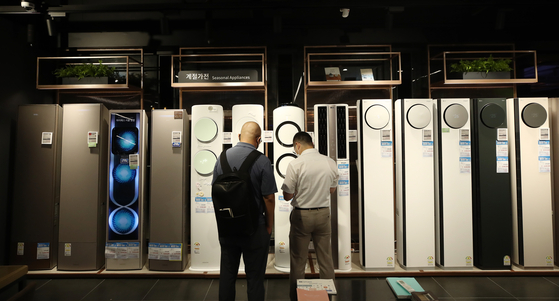 Air-conditioners on sale at a store in Yongsan on Thursday. Sales and rentals of air-conditioners are rising and are likely to further increase due to the intensifying heat wave. [YONHAP]

With more people being forced to stay at home with the resurgence of Covid-19 and the heat wave, home appliance rentals continue to rise.

According to Gmarket, in the first half of this year when compared to the same period a year earlier, home appliance rentals increased 48 percent.

Although the rate is slower than the 299 percent year-on-year increase in the first half of 2020, when the pandemic first emerged, rental demand remained strong.

Among the products, washing machine rentals jumped 550 percent, followed by microwaves, at 278 percent.

Air conditioner rentals this year were up 19 percent, slower than 953 percent year-on-year increase in the first half 2020.

The slower growth is largely expected to be the result of people already having rent those consumer items, while the easing regulations before the fourth wave are also considered to have played a role in the slower increase.

As the heat wave is expected to intensify this week, the rental of air conditioners and refrigerators is likely to surge.

“Demand for appliances and furniture have increased as more people are spending time at home due to Covid-19,” said Lee Young-eun, Gmarket manager. “Subscription consumption, which is an extension of rental, is gaining huge popularity as people can own and use the products without having to purchase by paying large amounts and only need to pay monthly subscription fees.”