[News In Focus] Naver takes on the world, market by market

[News In Focus] Naver takes on the world, market by market 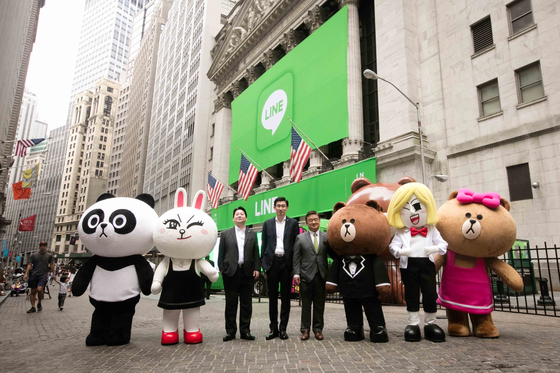 Executives of Line, a messaging affiliate of Naver, celebrate the unit's listing in New York on July 14, 2016. The stock was delisted last December, following the creation of a holdings unit between Naver and SoftBank. [LINE]


Naver first marched into Japan with a localized version of its portal in 2000, long before its Line instant messenger took off.

The search engine service flopped, and its quiet retreat in 2013 went almost unnoticed. Google and Yahoo squeezed them out of the market.

Now it’s back, and with 50 percent of A Holdings, a joint venture that Naver established with SoftBank in March that controls Yahoo Japan.

The dramatic turn of events symbolizes the tech company’s shifting strategy for international expansion: making acquisitions and focusing on the well-performing sectors instead of trying to replicate domestic services abroad.

With hard-earned lessons in Japan, it is now taking a multi-pronged approach to strengthening its overseas presence by region.

In Europe, it zeroes in on local resale platforms as the target of investment and future collaboration. For North America, webtoons and entertainment are its mainstay businesses.
Moving to other markets in Asia, Naver counts on the Line messenger to branch out into commerce and financial services.

Naver Global Investment Officer Lee Hae-jin staked his job on the result of global expansion.
“I will resign if the global businesses that I led fail in three to five years,” Lee was quoted as saying, according to local media reports, during a meeting with employees in March.

The European market could be considered most challenging, since the company has a weak standing in the region.
There, Naver opted to make investments into local platforms with dominant market share, hoping that the business ties will open the door for Naver’s technologies to be incorporated into them.

The funding follows a 59 million-euro investment into French secondhand marketplace Vestiaire Collective last year.
“We made the decision because the resale market is expected to grow significantly not only in Europe, but globally,” said a spokesperson at Naver.
“The sector is one of the few where big tech companies Google and Amazon don’t hold a strong grip,” he continued, “And those platforms can create synergy effects with our expertise in artificial intelligence-based search recommendations, cloud and advertising.”

Naver processed 3.6 trillion won ($3.1 billion) transactions last year, the most in Korea, according to WiseApp. Coupang was No. 2.

It looks to use its e-commerce prowess in expanding its business across Asia, especially in Japan.

Naver CEO Han Seong-sook said that the company will bring its Smart Store feature to Line and Yahoo as early as this year. Naver’s Smart Store is an online mall focused on selling goods from small merchants or mom-and-pop stores.

“The Smart Store will be available on Yahoo Japan, Line and Yahoo Shopping,” said Jong Ho-yoon, an analyst at Korea Investment & Securities.

“Its business model involves fees from sale and payments and advertising,” said the analyst based on Naver’s presentation for analysts.
He added that the mechanism will be used in other markets, including Taiwan and Thailand, where Line is the dominant player.

Web-based comics, or webtoons, stand as a crucial pillar of Naver’s business in the North America region.
Its webtoon applications are available in 100 different countries, with 72 million monthly active users, but Naver sees North America – especially the United States – as the main target.

It reorganized its corporate structure last year to designate its U.S. subsidiary as the main unit for its webtoon business.

To boost its appeal among younger people in the region, the tech company is moving into an adjacent area: showbiz entertainment.
In a stock swap with HYBE announced in January, Naver transferred its V Live unit to the entertainment agency’s beNX subsidiary.

As a result, Naver is merging its fan community platform service with that of HYBE’s, which is called Weverse.

“HYBE will lead the business based on its expertise in the entertainment business, while Naver will be focused on providing tools and technologies to support the platform,” the company said in a statement.

Naver rival Kakao adopts a similar formula as the operator of Kakao Talk messenger reorients its focus towards webtoons for international expansion.

Following a wildly successful introduction of Kakao Talk in Korea, the company released English and Japanese versions in 2011.

But the effort didn’t pay off as other messaging apps, including Line, WeChat and WhatsApp, already held a strong grip.

But Kakao Japan, a Japanese subsidiary that experienced the crushing failure of Kakao Talk, spotted a silver-lining in its Piccoma comics platform.

Started in 2016, it emerged as the top webtoon platform in Japan.

Still, the company refrained from taking a unilateral approach to further entering other markets.

Kakao acquired story-telling apps Radish and Tapas, which have solid footprints in the North American market.

For nearby Asian markets, it is showing up with the Kakao Webtoon platform. It rolled out its webtoon platform in Thailand and Taiwan in May.

“Our focus is not the number of countries in which we operate,” said a spokesperson at Kakao Entertainment.
“Rather, we carefully gauge each market to see the business potential and decide,” she said, adding that it plans to release Kakao Webtoons in India, the Middle East and Europe this year.